Serving all of Central New York

Since our founding, the guiding principle of our funeral home has been the commitment to treating each family who comes to us as our own. We are here to help you and allow you to afford funeral and cremation services.  With sincerity, pride, and dedication, we are committed to this time-honored tradition that was started by Dan's grandfather, Edward Holleran (United States Army, WWII Veteran). Following his time served with the Army and with the medical corp he felt the need to help people as a career.  It was either become a doctor, or become a funeral director. 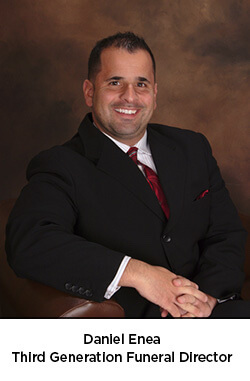 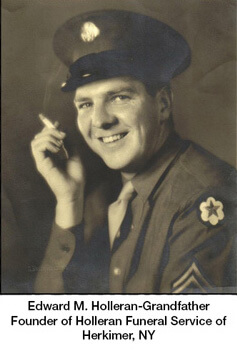 Ed loved the Mohawk Valley, graduated from Simmons School of Mortuary Science, served his apprenticeship with Hollenbeck Funeral Home in Gloversville (while working at Remington Rand, Ilion) and finally opened Holleran Funeral Service in Herkimer in the late 1940's. Ed only conducted one funeral his first year in business, but the business flourished in time because of his kindness and compassion. Mr. Holleran was a strong and humble man and had a devotion to the blessed Mary going to church every day in the month of May in honor of the blessed Mother, a tradition his brother Charlie Holleran, has carried on. Ed had an even stronger devotion to his family.  He was heavily involved in local clubs and events, and enjoyed being an announcer for local events on the radio.  Ed Holleran passed away in October of 1980, just three months after Dan was born.  The two would of made a dynamic team in the funeral business.

Dan was born and raised in the funeral business and more importantly has excelled in the art of helping people during a difficult time.  He worked in the business for several years after mortuary school and was also elected county coroner, until operating a funeral home in Florida for two years, 2011-2013.  He decided to return to NY in 2013 and was unable to re-join any of the family businesses so he opened the doors of his own funeral home in benefit of the community he serves, his family and friends. His reputation for providing the highest quality of service started to grow the minute he entered funeral service, and today he is privileged to serve a growing number of area families each year.

Dan has highly-qualified and deeply caring individuals to assist us in continuing the funeral home’s mission of providing excellence in service to families in their time of need while combining affordability.  You can have it simple as you would like it, or as elaborate, Dan says.  Either way, you will be paying reasonable prices.

Whether you have an immediate need for our services or you wish to begin pre-planning a funeral arrangement for you or someone you love, call us. We will be proud to serve you.  We also offer monuments, pet products, memorial stationary and cremation urns, and jewelry.