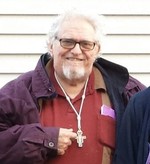 He was born January 1, 1941, in Frankfort, the son of the late Gladys E. Jackson. Richard was a graduate of Mohawk Central Schools. He went on to earn a Master’s Degree in Communications. On October 19th, 1963 Richard married the former Kathy M. Jackson at the Herkimer Methodist Church. That bond endured 56 years with Kathy’s passing in April of this year.

Richard started his career working at his family’s business, Sheldon’s Jewelry in Little Falls. He continued being a salesman working with Nestle for over 40 years, working his way up the ranks to Vice President. He was a member of the Grace Episcopal Church in Mohawk, where he was active with the church vestry serving as Senior Warden, Vestryman, and Treasurer. He also served as lay-minister and, with Kathy, were head of the church’s youth group. He also served the Episcopal Dioceses of Albany on the Standing Committee under Bishops Daniel Herzog and William Love. He especially loved his time working with the youth of the dioceses at Beaver Cross alongside the late Fr. David Terns and was particularly proud of all the work they continue to do.

He and Kathy were also loyal volunteers heading the Boy Scout Explorer Post in Mohawk and the American Red Cross. He enjoyed his time working with many people and local businesses fixing AV equipment.

In his retirement, he continued his devotion to his faith by studying and becoming a professed Franciscan Brother. He also enjoyed being an avid collector of stamps and coins from around the world, and shared with his wife a great love for their fur family.

Richard is survived by his sons and daughter-in-law, Andrew and Molly Drumm of Dolgeville and Robert Drumm and his companion, Shari Martin of Watertown; his special niece whom he raised as his daughter and her husband, Lori and Stephen Smith of Ilion; his grandchildren, Robert Drumm, Deanna Drumm and her fiancé Michael Lipka, Zachary Smith, Zane Smith, Andrew Drumm, Alexis Drumm, Zoey Smith, Jordan Drumm and Dylan Drumm; his brothers-in-law, Kirk and wife Lynn Jackson of N. Carolina and Mark Jackson of Tennessee; his close friends, Bishop Dan and Carol Herzog, Marilyn Bridger, and Mike Corvo; several nieces, nephews and cousins.

His celebration of life will take place at a later date at the convenience of the family. In memory of Richard, the family has requested donations be offered to the Beaver Cross Scholarship Fund, 575 Burton Rd., Greenwich, NY 12834 or Mohawk Valley Ambulance Corp.,15 State Rte 5s, Mohawk, NY 13407. Richard and his family's care has been placed in the trust of Mohawk Valley Funerals and Cremations, 7507 State Route 5 (corner of Bidleman Road) Little Falls, 315-508-5131. Please click above to add to his online memorial.