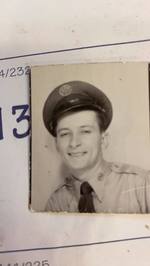 Jim was born on April 3, 1931, in Herkimer, son of the late Salvatore and Nellie Szlopka and attended Herkimer Schools, before entering the US Air Force in January of 1952. He served proudly during the Korean War achieving the rank of Sgt., Airman First Class and worked as a chef in the service. He was honorably discharged in 1957. His last professional employment was with MDS, Herkimer as an electronic technician retiring after 20 years of dedicated service and worked at Loblaw's as a young man. He was united to Carol Powers, whom he shared a loving union with until her passing after a courageous battle with cancer. They were married on December 24, 1952 in Herkimer. He was of the Catholic Faith and attended Sts. Anthony and Joseph Church, Herkimer.

He leaves his daughters, Laura Alarcon of California and Valerie Preston of Mohawk, a devoted and loyal friend, Joe Fariel and all of his friends at Herkimer's Galinsky Apartments.

Mr. Mastriano loved the great outdoors and conservation life. Some of his happiest moments were spent on the St. Lawrence River. He was a dedicated bass fisherman since the age of 10, enjoying the hobby for 60 years. He was a member of the Mohawk Valley Bass Association and served as their tournament director. Because of his wonderful cooking talents, Jim was even offered to cook at the Pentagon.

Mr. Mastriano and his family's care has been entrusted to Mohawk Valley Funerals and Cremations, 7507 State Route 5 (corner of Bidelman Road), Little Falls, 315-508-5131. There will be no services. In Jim's memory you may click above to plant a tree in his memory as a tribute to his love for the earth.