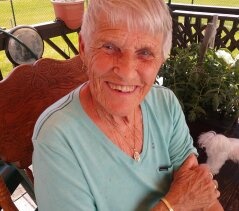 She was born in Schenectady on Feb. 13, 1942, daughter of the late John and Marion (Ostrander) Arnow. She was united in marriage with Charles "Chuck" Gay on Aug. 11, 1962 in Schenectady; a blessed union of nearly 60 years.
Carolyn was employed in the private/home nursing business for many years and at one time employed by the former Ilion Hospital and the former Herkimer Hospital. She was a founding member of the Herkimer Helpline created in 1985 and was selected for the prestigious Herkimer County "Woman of the Year" award for her dedication to the Mohawk Valley community. Carolyn considered her foremost and most important hobby taking of her family.

Carolyn and her family's care has been placed in the trust of Mohawk Valley Funerals and Cremations, 7507 State Route 5, Little Falls (corner of Bidleman Road), 315-508-5131. Her family will have a private gathering at MVFC to offer their final goodbyes, prior to cremation. There are no calling hours. A sincere thank you is offered to the caring staff at Valley Health Services, Herkimer for their kindness and compassion.
To order memorial trees or send flowers to the family in memory of Carolyn C. Gay, please visit our flower store.