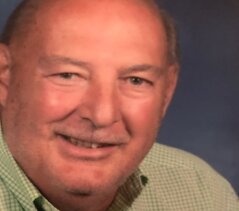 Chuck was born November 10, 1943, in Little Falls Hospital to Elfreda (Daniels) and Charles “Charlie” Balderston, and lived at 41 Arthur Street until his graduation from high school in 1961, after which he joined the U.S. Army. While on leave he met the Little Falls girl he would ultimately partner with for 54 years, Gail Maytan. They were married on May 7, 1966, at Christ Lutheran Church in Little Falls.

Chuck and Gail lived in the Wethersfield, Connecticut area for many years. Chuck worked briefly at Pratt & Whitney Aircraft in East Hartford, before entering the Life Insurance Industry. During his career, he earned the designation of Chartered Life Underwriter (CLU) from The American College and was a founding partner of the Advanced Financial Group.

When not working or mentoring young people (or playing golf), Chuck gave his time to volunteer work, especially for children. He was involved for years with the LensCrafters’ “Gift of Sight” program and significantly expanded the mobile vision van clinic that provided free eye exams and new glasses to disadvantaged children in the Hartford public school system. Chuck also volunteered during the summer at the Fresh Air Fund camps in Fishkill, New York, where he helped test and distribute free eyeglasses to campers. He was instrumental in organizing two golf tournaments in Connecticut to benefit children’s charities and was an active member of Bethany Lutheran Church in Cromwell, Connecticut for many years.

A celebration of Chuck’s life will be held in Little Falls in the future once pandemic conditions permit. In lieu of flowers, donations can be made to the “Chuck Balderston Scholarship Fund” at Little Falls High School for graduating seniors going to college. Checks are payable to the Little Falls City School, attention Mrs. Melissa Reff, District Treasurer, Little Falls City School District, 15 Petrie Street, Little Falls, N.Y. 13365. Chuck and his family's care has been placed in the trust of Mohawk Valley Funerals and Cremations, 7507 State Route 5, Little Falls, New York 13365, 315-508-5131. Please click above to add to his online tribute.
To order memorial trees or send flowers to the family in memory of Charles "Chuck" Balderston, please visit our flower store.