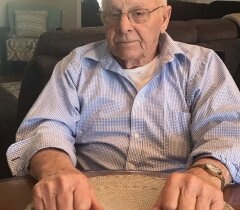 Charles E. Lynch, of Fairfield, passed away peacefully with his children by his side on November 19, 2021, he was 87.

Charlie retired from Teal’s Express as a truck driver 25 years ago however, his love for the open road and diner food was well known. His good-natured personality and loving spirit are what drew you to him. He was forever giving to those around him without question and never expected anything in return. Charlie will be forever missed by his family and the abundance of people whose lives he touched.

According to Charlie’s wishes, there will no funeral services. If you wish, you can make a donation to your favorite charity in his name. Charles' and his family's care has been placed in the trust of Mohawk Valley Funerals and Cremations, 7507 State Route 5, Little Falls (corner of Bidleman Road), 315-508-5131.
To order memorial trees or send flowers to the family in memory of Charles E. "Chuck" Lynch, please visit our flower store.