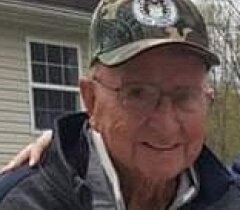 Mr. Christopher J. Monohan, USAF, age 90, of Monohan Dr., passed away suddenly on Monday afternoon, May 2, 2022, in the peaceful comfort of his home.

He was born on February 2, 1932 in Indianapolis, IN son of the late Christopher and Blanche (Getman) Monohan. He was educated in Ilion schools and graduated from Ilion High School, "Class of 1952". He entered into military service with the US Air Force in 1952 and served during the Vietnam conflict. He proudly served for twenty years and was honorably discharged, holding the rank of Tech Sgt in 1972. On June 28, 1980, he was united in marriage with Nancy L. Bower in Ilion; a devoted union of 44 years. Following his time with the US Air Force, Christopher was employed with the Herkimer Motel for 32 years.

Christopher loved cooking. He enjoyed being outdoors, camping and boating. For several years, he and his wife Nancy spent many wonderful times wintering in Florida. Above all else, Christopher truly found his greatest pleasure in being with his cherished family members. To Christopher's credit, all of his endeavors were accomplished through self-motivation and determination. He was always supervising and "bringing the boss to all" which gained him the nickname "Sarge" as his family affectionately called him. He was a source of strength, and a foundation for his children and grandchildren in every way. He found gratitude in his heart by helping others. Christopher managed to put family first, no matter what and will be sadly missed by all who were fortunate enough to have known him.

Survivors include his large and loving family; his wife Nancy at home; his two children from his previous wife, Betty Monohan, Cyndy Monohan of Ilion and Randy Monohan (Julie) of Washington, DC; his children with his wife Nancy, Daniel Noffer (Dawn) of Little Falls, Diane Dicob of Mohawk, Timothy Noffer (Christie) of Ilion, and Susan Ball (Delbert) of Herkimer; his brother, Richard Monohan of Herkimer; numerous grandchildren, great grandchildren, nieces, nephews and cousins. He was preceded in death by his beloved son, Michael Noffer, who passed away in 2007; a son in law, Donald Dicob in 2014; his three siblings, Tom, Francis and John.

In respecting his wishes, there are no calling hours or public funeral service. A celebration of his life will take place at the convenience of the family, at a later date. Arrangements for cremation are under the direction and care of Mohawk Valley Funerals and Cremations, 7507 State Route 5 (corner of Bidleman Rd.), Little Falls, 315-508-5131, the area's official Veteran and Family Care Provider.
To order memorial trees or send flowers to the family in memory of Christopher J. Monohan, USAF, please visit our flower store.