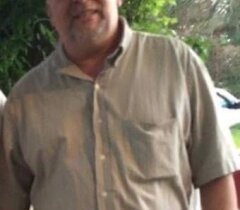 East Herkimer, NY-Daniel M. Bass, 66 of East Herkimer, NY died September 6, 2018, at home, from a long battle with cancer. He was born on October 13, 1951, in Little Falls; the son of Ruth Busch Bass and the late Everett J. Bass. He attended Herkimer High School and HCCC. Daniel married Coleen Murphy on December 30, 1972. On November 1, 1972 Daniel entered the US Army and was stationed in Fort Eustis, VA. where him and his wife met their lifelong friends Miriam and Larry St. John of Illinois. Daniel was honorably discharged on November 7, 1974. Daniel worked at Remington Arms where he served as the President of the union and where he retired from after 30 years.  He then worked for the United Mine Workers of America as an International Union Representative, which he retired from at age 60. Daniel is survived by his wife Colleen at home; his mother, Ruth Bass of Herkimer; cherished children, his son, Daniel Bass Jr. and wife Carrie Knopka Bass of Herkimer; daughter, Alisa Brewer and her husband Michael Brewer of Newport and daughter, Melissa Bass and her significant other Willie Johnson of Newport. He also leaves ten grandchildren that he loved dearly; Stephanie Bass Ward and her husband Jeff Ward, Joseph Bass, Tyler Kuzontkoski, Jordyn Kuzontkoski, Zachary Barretta, Nathan Ruppert, Mikailyn Ruppert, Kaden Brewer, Landen Brewer and Jordee Brewer. He was also survived by several brothers and sisters; Dave Bass (Karen), Art Bass, Julia Lyon (Daryl), Val Gressler (Chris), Bill Bass (Jan), Duane Bass (Shirley), Bernie Bass (Barb), Ruth Avery (John Ammerman), Carrie Bass and the late Everett Bass and late Jason Bass. He is also survived by several nieces and nephews.He was also predeceased by his son in law; Daniel Barretta, mother in law Patricia Tauroney and loving grandparents; Lester and Margaret Shaut. A special thanks to his nephews Art Bass Jr. and Justin Bass for making sure he got to do the things he enjoyed. Also, to his sisters Val and Julia and brothers Dave and Art for making sure he got back and forth to his treatments and doctor appointments in Albany and Syracuse. We are extremely appreciative for the loving care and compassion that Dr. Richard Sullivan from the VA gave Dan during his long battle. Expressions of sympathy may be made to the Ronald McDonald House, 1100 East Genesee St. Syracuse NY, 13210.  Mohawk Valley Funerals and Cremations (Daniel J. Enea, owner), 7507 State Route 5 (corner of Bidleman Road), Little Falls (315-508-5131) has been entrusted with Dan's funeral arrangements.  Relatives and friends are respectfully invited to a memorial Mass of Christian Burial commencing at 10 am on Wednesday, Sept. 12, 2018 from St. Francis de Sales Church, N. Bellinger St., Herkimer with the Very Rev. Mark Cunningham, pastor officiating. The United States Army will offer military honors, following the mass. An hour of visitation will be held in the vestibule of the church, after the military presentation.  Burial will be private and at the convenience of the Bass family.  Please click above to add to his online memorial.  Relatives and friends are invited to join the family and celebrate Dan's life at the Herkimer VFW, following the funeral service.
To order memorial trees or send flowers to the family in memory of Daniel M. Bass, please visit our flower store.