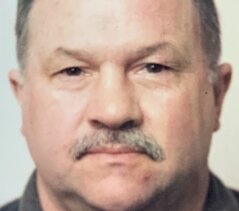 David was born in Little Falls on October 4, 1951, son of the late David and Eleanora (Pearl) Smith and educated at Owen D. Young Central School where he also graduated high school. On July 13, 1974, he was joined in marriage with Patti Ann Steenburg in Fort Plain at St. Paul Lutheran Church, recently celebrating 47 blessed years of marriage. Dave was employed as a NYS Correctional Officer, retiring after nearly 25 years of dedicated service from the Marcy Correctional Facility.

One of his favorite pastimes was riding his many motorcycles. He was a Harley man and loved every one of his bikes. Dave loved hunting and being outdoors enjoying everything nature had to offer. He was a simple person who found much enjoyment working around his home, which he was very proud of and put much effort into.

Survivors include his beloved family, his wife Patti at home; his children, David Smith and wife LeighAnna of Salisbury Center, Melissa Hess of Starkville; his cherished grandchildren, Alexis Smith and Allison Hess; sister, Cheryl Zwickel of Gloversville; father in law and mother in law, Allan Steenburg and Eva Thompson; many nieces, nephews and cousins.

Relatives and friends are respectfully invited to a celebration of David's life commencing at 1 pm on Saturday, January 8, 2021 from the chapel of Mohawk Valley Funerals and Cremations, 7507 State Route 5 (corner of Bidleman Road), Little Falls, 315-508-5131. Visitation will be held also on Saturday, Jan. 8th from 11 am until 1 pm, prior to the service at MVFC. Burial will take place privately. In lieu of floral offerings, kindly consider and send memorial contributions to St. Jude's Children's Hospital, 262 Danny Thomas Place, Memphis, TN 38105.
To order memorial trees or send flowers to the family in memory of David John Smith, please visit our flower store.