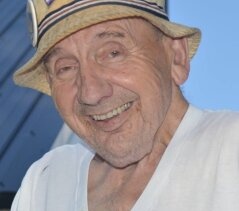 Mr. Dayton B. Leon, Sr., age 91, a lifelong Little Falls resident (Flint Ave., Ext.), passed away early Thursday morning, June 2nd, 2022 at Bassett Healthcare, Cooperstown, with the love and support of his family at his bedside.

Dayton was born on Feb. 11, 1931 in Dolgeville, son of the late Charles and Edna (Johnson) Leon and educated in Little Falls schools. He was a proud US Army veteran, serving from 1951-1953 during the Korean Conflict. On February 14, 1955, Dayton was united in marriage to his wife of 63 years, Florence S. Jones, in Marcy, NY. Mrs. Leon passed away on December 22, 2018. A hardworking individual, Mr. Leon at one time was employed with Little Falls Hospital, also the Daniel Green Factory and lastly, Lasalle Labs, Little Falls.

Mr. Leon always put the needs of his family before his own. He had morals and lived life to the fullest. He was well known throughout Little Falls, especially by his "girls" at Kinney's Drugs. He loved sports and was an avid Buffalo BIlls and New York Mets Fan and loved watching Syracuse sports. He enjoyed his yearly trip to the Saratoga Race Track and past memories with his friends at OTB, Little Falls. His happiest moments were spent surrounded by his family, each and everyone whom he cherished. He looked forward to his "hen" party, the second Sunday of every month.

To Dayton's credit, all his efforts, and endeavors were accomplished through self-motivation, well-calculated thoughts, and determination. He was a powerhouse, a source of strength, and a foundation for his children and grandchildren, emotionally and physically. His generosity reached great destinations, always done in a quiet and unassuming way. He found gratitude in his heart when he helped others, especially those he loved. He always managed to put family first, no matter what.

Funeral arrangements are under the direction and care of Mohawk Valley Funerals and Cremations, 7507 State Route 5, Little Falls (corner of Bidleman Road), 315-508-5131. The Leon family will receive relatives and friends at MVFC on Sunday, June 5, 2022, from 2-4 pm. The funeral will commence on Monday, June 6, 2022 at 11 am at Church Street Cemetery, West Monroe Street, Little Falls with the Rev. Joseph Famulare, officiating. Military honors will be offered by the US Army. Memorial contributions in Mr. Leon's tribute can be made to a veteran agency of your choice. The Leon family would like to thank the doctors, nurses and staff at Bassett Healthcare, ICU for their kindness and compassion offered.
To order memorial trees or send flowers to the family in memory of Dayton B. Leon Sr., please visit our flower store.