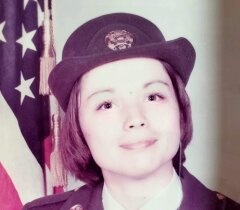 Mrs. Diane Louise (Kovac) Stocking, age 66, went to the loving arms of her Lord and Savior on August 19th, 2020 in Utica. The suffering and pain she experienced during a decades long battle with MS is over and she is free and at peace.

Born October 16, 1953 at Bassett Hospital in Cooperstown, Diane was the daughter of the late Martin Thomas and Louise Jane (Hawver) Kovac of Mohawk. She attended Fisher Elementary and Mohawk Junior/Senior High School. After high school, Diane attended Herkimer County Community College where she received her AA and was elected to Who's Who in American Junior Colleges. In 1986, Diane received her BA from the University of Maryland, Munich.

Diane joined the United States Army on 26 October 1976. She served as a 91G2O, Behavioral Sciences Specialist. As a 91G, counselor, she served in Social Work Services at Walter Reed Hospital and then transferred to Germany. Diane continued working as a counselor in Social Work Services and, later, at a Community Drug and Alcohol Center in the 1st Armored Division in Ansbach and Fürth, Germany. Counseling and helping others was her lifelong passion. Diane obtained the rank of SP5 (Specialist 5, E-5) and was discharged from the Army on October 25, 1980.

On October 28, 1980 Diane married Lonnie Eugene Stocking in Mohawk, and began her life as a devoted and loving Army wife and mother. She was fiercely devoted to her family and friends. She enjoyed cooking, crocheting and cross stitch, singing, dancing and laughing.

Diane was predeceased by her father, Martin Kovac and by her maternal and paternal grandparents, John and Susanna Kovac and Harry and Edith Hawver. Besides her husband Lonnie at home, she is survived by her mother Louise (Hawver) Williams (Mohawk), her son, Aaron John and Sonia Stocking (Little Falls), her daughter, Heather Louise Stocking and her husband Danny Zerott (Richfield, MN), her brothers Mark Thomas Kovac (North Pole, AK) and Edward Scott Kovac (Mohawk). Diane is also survived by her grandchildren Jeanette Diaz, Julie and Katherine Velazquez, Adrian and Lucas Aaron Stocking and by numerous nephews and cousins along with her aunt Evelyn (Kovac) Sweet of Mohawk.

Our family will celebrate Diane's life with memorial calling hours/visitation from 6:00 PM to 8:00 PM on Thursday, August 27, 2020 at Mohawk Valley Funerals and Cremations "The Veteran and Family Memorial Care Choice", 7507 NY-5 (corner of Bidleman Road) Little Falls, 315-508-5131. Face masks must be worn and COVID 19 procedures will be followed. Interment will be Friday, August 28th, 2020 at 9 AM at the Gerald B. H. Solomon Saratoga National Cemetery; 200 Duell Rd., Schuylerville, NY. Members of the US Army will offer military honors. To offer condolences to the Stocking family, please click above.
To order memorial trees or send flowers to the family in memory of Diane Louise Stocking, please visit our flower store.