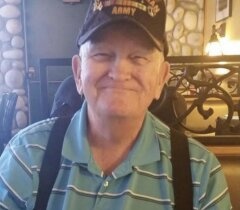 Donald was born on January 1, 1946 in Ilion, a son of the late Mack and Hazel McCauley. Donald was educated in Ilion Schools and went to join the United States Army at the age of 17. He is a Vietnam Veteran from 1965-1967. Donald was a past commander of the Ilion Frankfort VFW Post 502. He was the voice of democracy, very active within the post, always attending parades, honors for funerals and helping out at BINGO. Donald was also a member of the Mohawk American Legion, as well as a member of the Vets United.

Donald retired from Remington Arm Co. Plant after 43 years. He was an avid sports fan, always attending his grandchildren’s games, being their biggest fans and a real CVA Legend. Donald was also a baseball and soccer coach, but he also was a member of a local bowling league and played softball. Most of all, Donald was a loving father, grandfather, brother, friend and so much more to his community; Donald will truly be missed by all who knew him.

Donald and his family's care has been entrusted to Mohawk Valley Funerals and Cremations, 7507 State Route 5, Little Falls. 315-508-5131. The Mohawk American Legion Post 25 will be conducting a service at the funeral home at 5:45pm. Donald’s funeral service will commence at 6 pm on Thursday, June 24, 2021 at the funeral home with Chaplain Kenneth Palmer, Elder of Mohawk Reformed Church, officiating. Music will be offered by Sharon Palmer. Relatives and friends are invited to pay their respects at the funeral home from 4 pm until 6 pm, prior to the service.
To order memorial trees or send flowers to the family in memory of Donald H. "Donnie" Wedemeyer, please visit our flower store.