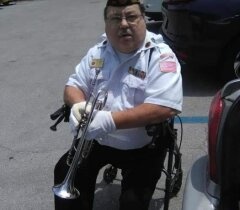 Mohawk, NY/Vero Beach, FL-Mr. Edward P. "Ice Box Eddy" Begley, age 66, formerly of Mohawk (where he owned and operated his business for many years, Ed's Refrigeration and got the nickname, "Ice Box Eddy") and since 1996 a resident of Vero Beach, FL, passed away after a short illness on Wednesday, June 12, 2019 the Cleveland Clinic, Vero Beach, Fl.  Ed was a proud United States Army veteran and played Taps with the Vero Beach, FL military honor guards. Ed was born on May 6, 1953 in Herkimer, son of the late Edward Joseph and Susan (Gollogly) Begley and educated in Mohawk schools.  Mr. Begley answered the call of duty and entered into military service enlisting with the US Army on June 24, 1972 and was honorably dischaged on June 23, 1978, giving six years of dedicated service to the United States of America.  He was joined in marriage on June 29, 2012 with the former Carol Garlock, after sharing thirty years together.  Ed was a proud member of the Vero Beach, FL Moose Lodge, Eagle's Club and the American Legion.  Mr. Begley was a talented trumpet player and enjoyed his many rides on his Harley Davidson Motorcycle until he no longer could. Survivors include his beloved wife Carol of Vero Beach, FL; his daughters and sons in law, Brooke and Mitch Keesee of Vero Beach, FL, Brittany Garlock and Jason Wellington of Mohawk and Brandon Garlock of Vero Beach, FL; two brothers, Daniel Begley and wife Melinda of Little Falls and Dennis Begley and wife Becky of Ilion; three beautiful nieces, Susanne, Lauralynn and Julianna; aunts, uncles, cousins, in-laws and friends.  Besides his parents, Ed and Susan Begley, he was preceded in death by his sister, Linda Begley.   Mohawk Valley Funeral and Cremations, 7507 State Route 5, Town of Manheim (corner of Bidelman Road), between Little Falls and St. Johnsville, 315-508-5131, has been entrusted with Ed's funeral arrangements.  Relatives and friends are invited to pay their respects and offer condolences to the Begley family at the funeral home on Saturday, June 22, 2019 from 8:30 a.m. until 10 a.m.  A funeral service with Pastor Chris Schmuske of the Oak Ridge Free Methodist Church, Herkimer, officiating, will commence at 10 a.m. following visitation, also at the funeral home.  Funeral procession which will be escorted by the Patriot Honor Guard, will follow to St. Mary's Cemetery, town of Herkimer where interment will take place.  Military honors will be offered by the US Army.  Kindly consider honoring Ed's memory and service to our country with a contribution to the Patriot Guard Riders of NY (PGRNY), PO Box 637, Wappingers Falls, NY 12590.
To order memorial trees or send flowers to the family in memory of Edward P. Begley, please visit our flower store.