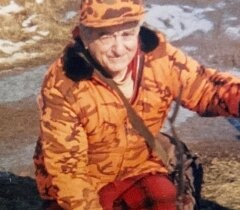 Edward was born on May 10, 1936 and was the son of the late Cecil and Anna (Hoina) Boyce. He graduated from West Canada Valley Central School in 1955, he then went on to serve for our country, training for his Army service at Fort Dix, New Jersey. Edward served for six years before receiving his honorable discharge. He then worked for Middleville Tannery, Gloversville Tannery and many local farms. Edward also spent time working alongside his brother Frank at Frank Boyce’s Roofing and Siding.

Edward loved the outdoors, he loved hunting, fishing, gardening, and spoiling his next-door neighbors’ dogs with treats. His friend, Kenny Gillman, could often be found fishing with him.

He was preceded in death by his parents, as well as his brother who passed away in 2007. He is survived by his niece Linda (Boyce) Lovrin and her husband Russell of New Hartford.

Mr. Boyce had many great friends and neighbors who helped him throughout the years. His family would like to thank Veronika and Axel Stoecke and their daughter Nina, Linda and Russ Mullenax, and Sue and Chris Goldsmith.

Edward and his family's care has been entrusted to Mohawk Valley Funerals and Cremations, 7507 State Route 5, Little Falls (corner of Bidleman Road), 315-508-5131. Services for Edward will be private and at the convenience of the family.

To order memorial trees or send flowers to the family in memory of Edward Cecil Boyce, please visit our flower store.