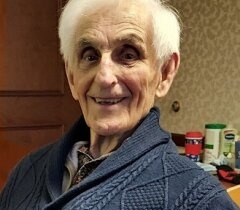 He was born in Little Falls, the son of the late Peter and Agnes (Mazur) Widanka on August 28, 1922 and graduated from St. Johnsville High School. In November of 1953, he married Lenore Adickes of Bayshore, Long Island. They enjoyed a blessed union of 33 years prior to her death in 1987. Edward grew up on a farm and has had a lifelong love of agriculture. Edward owned and operated Valley Equipment Company in St. Johnsville, NY for many years which was a John Deere Franchise and also sold AO Smith Storage and Harvester Silos. Through a program at Cornell University, he became a pioneer in the artificial breeding of animals. He was also a manager of the Eastern Breeding Association. After he retired, he sold AT&T Computers to farms and ranches and attempted to create one of the first databases for agriculture. He married Gloria La Ricos from Baltimore in 1989. They lived in New Hartford before eventually moving to Sarasota, Florida. Edward remained in Florida until April of 2021, following the passing of his second wife in 2002.

Edward loved to travel and enjoyed gardening, golfing, dancing and growing different types of bamboo. He was very proud to be a lifelong Rotarian and his service to the communities he resided.

He leaves behind his daughter, Bona Starring and her husband Richard of Little Falls, his son, Kenneth Widanka and wife Holly of Henrietta, NY.; his grandchildren, Michael Pawelek (Brittany), Andrew Widanka, Kailee Widanka Schmitt (Michael) and Eric Widanka and one great grandchild, Mason Pawelek and several nieces and nephews.
He was predeceased by his parents and his sisters Stella Wojcieson, Walda Thomas, Mary Karpiak and brother Stephen Widanka.

The family would like to offer a special thank you to the staff in the Windham Household at the Masonic Care Community for their special care and comfort given to Edward. In lieu of flowers, please consider a donation to the Masonic Care Community,2150 Bleecker St., Utica, N.Y. 13501 or charity of your choice in Edward's memory. Interment will be in Rural Park Cemetery, Inghams Mills, at a later date for the immediate family only. There are no calling hours. Arrangements for cremation are under the direction and care of Mohawk Valley Funerals and Cremations, 7507 State Route 5, between St. Johnsville and Little Falls, 315-508-5131.

To order memorial trees or send flowers to the family in memory of Edward M. Widanka, please visit our flower store.