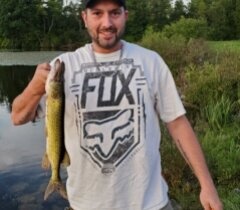 Eric S. Coffin, age 36, of Cassville, passed away on Thursday morning, April 7th, 2022 in the town of Bridgewater, NY, as the result of injuries sustained in a motor vehicle accident.

He was born on April 24, 1985 in Ilion, son of Scott Coffin (Zondra) and Jennifer (Gee) Currie (Randy Lawson) and educated in Poland and Frankfort schools. He married the love of his life, Jennifer Devereese on September 10, 2007, in Little Falls; they would have celebrated 15 years together, this year. He was employed as a landscaper during his professional career.

Eric loved being outdoors, camping, fishing, going on the boat and enjoying everything mother-nature had to offer. Above all, he put the needs of his family, especially his children, before all else. Eric manifested the love for them in a way that was crystal clear; they were the delight of his large heart and brought a sparkle to his eye. Eric always understood the importance of family. To Eric, family connection was important, and he always recognized each of his children’s accomplishments and let them know how proud he was of them, holding them close to his heart. He deeply valued and uniquely appreciated each of them, spending every minute he could cherishing family moments, right until the final and untimely minutes of his life. He will be loved and remembered, forever.

Calling hours and a funeral service will be private and at the convenience of the family at Mohawk Valley Funerals and Cremations, 7507 State Route 5, between Little Falls and St. Johnsville, 315-508-5131. Interment will also be private.

To order memorial trees or send flowers to the family in memory of Eric S. Coffin, please visit our flower store.