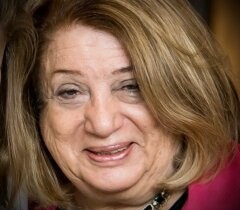 Frani Joyce Newman, 76, of New Hartford, New York, passed away on Monday, March 16th, 2020, in Utica, New York. She was surrounded by the loving voices of her children, grandchildren, extended family, and friends.

Frani was born in Utica, New York, to Charles and Lila (nee Stone) Weinstein, on March 3, 1944. While her father Charles was in military service to our nation, Frani and her mother Lila lived in Garden City, Kansas, but the family returned to the Mohawk Valley as soon as they were able.
An alumna of New Hartford High School, Frani graduated from Boston University in 1966 with a degree from the School of Communications. She then returned to New York to begin a life devoted to education and community service, with a particular passion towards counseling women and advocating for women’s rights. Frani first taught at Utica Free Academy and later at Mohawk Valley Community College and Utica College, where she was a beloved professor to her students and a valued colleague to her peers for many years.

Frani’s next chapter began when she decided to pursue a master’s degree in social work at Syracuse University. Upon completing her Master of Social Work in 1988 Frani devoted herself to helping families and women through her therapy practice, Women’s Counseling Services. For over 30 years, she served the people of Oneida County, selflessly offering guidance, advice, and hope by sharing with the community at large the same deep wisdom, steadfast values, and unwavering principles that she instilled in her own family.

Many of Frani’s passions could be traced directly to her parents, Chuck and Lila, and she always took great pride in acknowledging that fact. She was a voracious reader, a passionate consumer of news, politics, and commentary, as well as an incredible storyteller. These qualities were the legacy of her father. Meanwhile, Frani’s love for the arts came from her mother, a gifted artist and the wellspring of Frani’s own talents in that arena. She was a gifted painter and sculptor in her own right. Frani also inherited from her folks a passion for golf. As a member of the Skenandoa Club of Clinton for over 30 years, she shared her love of hitting the links not only with Chuck and Lila, but with her brothers, sons, and grandchildren, as well. And, like her parents, Frani was extremely proud of her Utica roots; she loved to make even the smallest connection back to Utica and to remind others, “See? All roads lead to Utica.”

Of course, among all of Frani’s interests and passions, nothing surpassed her love of her family. She was an adoring daughter, who, after her parents passed, celebrated their memory and kept them alive through stories that she proudly shared with all. She was also a devoted mother who would do anything for her two sons, always beaming with pride at every one of their accomplishments, large or small. And she was blessed to find her greatest loves – her grandchildren – late in life. Frani regularly told her sons and their wives that her four grandchildren were the best gift she ever received. She cherished every single interaction with them, and she was thrilled to share these interactions with friends, family, or complete strangers—anyone who was available. For Frani, her children’s children were her crowning accomplishment.

Frani is survived by her two sons; Stephen (Karen) and Adam “Stone" (Randi); her four beloved grandchildren Charlotte, Aaron, Vivian and Lila; and her two brothers Jeffrey (Fran) and Donald (Margaret). She is predeceased by her parents Charles and Lila (nee Stone) Weinstein.

The funeral service will be held at the Temple Beth El Cemetery, Wood Road in Whitesboro, NY on Friday, March 20, 2020 at 1:00 PM ET / 10:00 AM PT with Cantor Kal Socolof, officiating the service. For those who cannot attend, there will be a live stream of the proceedings which can be accessed here. https://www.youtube.com/watch?v=ontUk7yehNY

Memorial donations may be made to The Munson Williams Proctor Institute of Utica, New York. The family wishes to extend their gratitude to the arts center for enriching the lives of the “Weinstein Women” with dynamic arts and culture classes and seminars.

Frani and her family’s care have been placed in the trust of Jacobson-Pizer Funeral Chapel. (315)797-9121. Online condolences may be offered by visiting www.mohawkvalleyfunerals.com .
To order memorial trees or send flowers to the family in memory of Frani Joyce Newman (Weinstein), please visit our flower store.