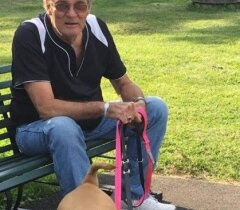 Frank was born on January 22, 1944 in Little Falls son of the late Frank J. Harris. He received his education at St. Mary's Academy, Little Falls and served our country with the United States Army. His last occupation was with Chicago Pneumatic and was also employed as a machinist. He also worked for Bendix and Utica Converters. Frank loved horseracing.

Survivors include his devoted wife, Charlene at home; a daughter, Kimerly Harris-Cutler and husband Matt of Holland Patent, Chad Harris of Herkimer and Kevin Harris; a cherished granddaughter, Jourdan; siblings, Don "DJ" Harris, of Cobleskill, Linda Button, of Clifton Park, and Kathy Kovacs (Harris), of Johnstown and his beloved canine companions, Grisley and Cocoa. Also surviving are many nieces, nephews and cousins. He was preceded in death by his sisters, Barbara Harris DeCarlis and Shirley Harris.

Frank and his family's care has been placed in the trust of Mohawk Valley Funerals and Cremations, 7507 State Route 5 (between Little Falls and St. Johnsville), 315-508-5131. There will be no services.
To order memorial trees or send flowers to the family in memory of Frank J. Harris Jr., please visit our flower store.