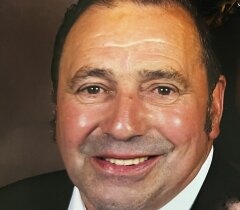 He was was born in Fall River, MA on June 13, 1936 son of the late Louis and Stella (Olivera) Souza. He was united in marriage with Pauline Ponte Feb. 20, 1954 in Fall River, MA; a loving and devoted union of 68 years. The couple met when they were children in Sunday school. In his earlier years, George worked for the tannery. He was employed for ten years as a foreman in the construction business, followed by his farming career and has lived in the Ephratah/St. Johnsville area for several years, where he was known, loved and respected by many.

Mr. Souza was an extremely hard working man. The needs of his family always came first in his life as a dedicated husband, father, vavu (grandfather), visavu, (great grandfather). George is remembered for his unwavering commitment to being available for each and every one of his family members. Not only did he prioritize his best friend and his love, Pauline, but George also extended his loving heart towards his children, and then his grandchildren, who were the “apple of his eye." He will be sadly missed by all who knew and respected him.

Besides his wife Pauline, at home; survivors include his children, Stella Walrath and husband Everett of Dolgeville, Frank Souza and wife Rose of Frankfort, George Souza and wife Kristina of St.Johnsville and Mark Souza and wife Terri of Ephratah; grandchildren, Jennifer Fraiser (Jeff), Justine Lewis (Aaron), Jonathan Souza,Timothy Ouellette, Nicholas Souza, Joshua Souza and Rebecca Souza; great grandchildren, Aron, Andrew, Adalyn, Ella and Lincoln; several nieces, nephews and cousins. He was preceded in death by his granddaughter, Jessica Ouellette and by his siblings, Victoria, Mary, Alice, Manny, Louis, Tony and Joseph. The family would like to offer their deepest gratitude to the RGL Volunteer Fire Department for their professionalism during this difficult time. A heartfelt thanks also to Dr. William Parker and Staff for all their care. Kindly consider memorial offerings in George's name to RGL Volunteer Fire Dept., 172 Church St., St. Johnsville, NY 13452.

Relatives and friends are respectfully invited to a graveside service commencing at 11 am on Saturday, May 14, 2022 with the Rev. Michael Jablonski, officiating at St. Joseph's Cemetery, Dolgeville, NY. There are no calling hours. Immediately following the burial service, all will be invited to a celebration of George's life, at a place to be announced. The Souza family placed funeral arrangements and the care of their father to Mohawk Valley Funerals and Cremations, 7507 State Route 5 (corner of Bidleman Rd.), Little Falls, 315-508-5131.
To order memorial trees or send flowers to the family in memory of George B. Souza, please visit our flower store.