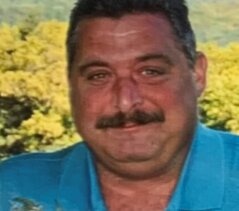 He was born on October 30, 1967 and grew up in North Utica under the loving care of his parents, Joseph Gibilaro and Cheryl (John) Freleigh. He was predeceased by his sister, Suzanne McPherson and his grandparents, Irene and Roy Skidmore, who he had fond memories of bowling with.

He is survived by his loving wife, Lisa of Ilion; parents, Cheryl and John Freleigh of Utica and Joseph Gibilaro and Julie of West Virginia; son, Geoffry William (Stephanie) Gibilaro of Rome; daughter, Jessica Leigh Gibilaro of Ilion. Also surviving are two brothers, Eric Gibilaro of Virginia and Bob (Belen) Gibilaro of Tennessee; two sisters, Adele (Erik) Boese of Virginia and Jaime Robertson of Syracuse; and many nieces, nephews, aunts and uncles, but he showered extra loving affection on his nephew, Benjamin Gibilaro.

George was very involved in the Knights of Columbus, Ilion and the American Legion, Mohawk and made very special friends there among whom are Mike Murphy, Steve and Sonia Frank, Fran Madore, Cheryl Jassak-Huther and Owen Jassak. He recently adopted a puppy, Boden Max, who “picked him", according to George. He was employed at the Marcy Correctional Facility and Greene Correctional Facility, retiring from the NYS Department of Corrections as a Sergeant, following 25 years of service. George enjoyed woodworking following his retirement. He made an impact on all of the lives he touched and will be greatly missed.

Relatives and friends may pay their respects at a Celebration of Life commencing on Thursday, February 3, 2022 at 2:00 pm at the Knights of Columbus on West Street in Ilion, NY. There are no calling hours. Donations can be made in his memory to the Mohawk American Legion, 43 West Main Street, Mohawk, NY 13407, c/o Veterans Committee. George and his family's care has been placed in the trust of Mohawk Valley Funerals and Cremations, 7507 State Route 5, Little Falls (corner of Bidleman Road), 315-508-5131
To order memorial trees or send flowers to the family in memory of George William Gibilaro, please visit our flower store.