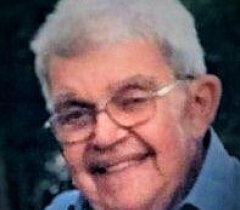 Mr. Gerald R. "Goldie" Goldstein, age 82, of Shells Bush Rd., Herkimer, passed away peacefully on Wednesday evening, April 13, 2022 at Rome Memorial Hospital, following a long illness. At the time of his passing, he had the love and support of his family, by his bedside.

He was born on June 26, 1939 in Little Falls in the family home, son of the late August and Dorothy (Garguilo) Goldstein and educated in Little Falls schools. He was united in marriage with Geraldine Congdon on June 5, 1965 in Mohawk at the Methodist Church; a loving and devoted union of 56 years, filled with happiness and many wonderful memories. They were truly meant to be together. Mr. Goldstein had a proud career serving with the United States Army and was honorably discharged on September 30, 1967 as a testimony of his honest and faithful service to our country. His last professional employment was proudly held with Remington Arms, Ilion, where he was employed for several years of dedicated service as a machinist.

"Goldie" as he was affectionately known as by family and friends, had a outgoing personality and made friends easily. He was vivacious, bubbly and possessed a wonderful sense of humor (which most can remember him by). His involvement in the community was evident with all the friendships he created and especially enjoyed the times visiting his pals at Tony's Pizza in Herkimer. He was well-respected and known for his friendly and out-going service to others. In his leisure time, Goldie loved to collect antiques, clocks, signs and many other collectibles. He and his wife attended the Oak Ridge Free Methodist Church, Herkimer. Goldie left a mark on this world and will be missed by all those who knew his kind and caring soul.

Survivors include his devoted family; his wife, Geraldine at home; his son, Greg Goldstein and wife Emily of Seattle, WA; one brother, Ronald Goldstein of Mohawk; three grandchildren, Elliot, Hannah and Payton Goldstein; many nieces, nephews, cousins; in laws, and friends. He was welcomed into eternal rest by his brother, Charlie Goldstein and his wife, Beatrice and by a sister in law, Jeanne Goldstein, along with many in-laws. Geraldine and Greg would like to thank the many family members and close friends for their kind acts of sympathy during their difficult time.

A funeral service will commence at 6 pm on Monday, April 18, 2022 in the chapel of Mohawk Valley Funerals and Cremations, 7507 State Route 5 (corner of Bidleman Road), Little Falls with the Rev. Chris Schumske, pastor of Oak Free Methodist Church, officiating. Military honors will be offered by the US Army. Relatives and friends may pay their respects, on Monday, from 4-6 pm, prior to the funeral service. Interment will take place at the convenience of the family at Rural Park Cemetery, Inghams Mills.
To order memorial trees or send flowers to the family in memory of Gerald R. "Goldie" Goldstein, please visit our flower store.