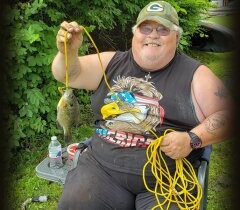 Jim was born on October 8, 1962, in Boynton Beach, FL, the son of the late Robert C. and Mary J. Petrie Eckler, Sr. His family settled in St. Johnsville, where he attended St. Johnsville High School.

Prior to his retirement, Jim was employed with Grannies’ Kitchen, Frankfort, for many years.
He was of the Christian faith. Jim was an avid Green Bay Packers fan who was proud to show it and Jeff Gordon fan. He was a very caring soul who had an enormous sense of humor.

Jim is survived by his daughter, Ashley Fegley of Troy; his siblings, Robert C. Eckler, Jr., Patti Eckler and Linda Eckler Rathbun; his niece, Desiree Sanders and her husband Raymond; his nephews, Jason Rathbun, Benjamin Rathbun and wife Danielle, Toby Case and Richard Case; his great nephews, Dustin, Jordan and William Vicciarelli, and Devan and Zachary Sanders. . He also leaves his lifelong friend, Kim Eckler and his step children whom he considered his own, Amanda Smith, Angie Lanphere, Michael Sweet and Kayla Sweet.

In keeping Jim’s wishes, cremation will occur. All services will be private and held at the discretion of his family.

Jim and his family’s care have been placed in the trust of Mohawk Valley Funerals and Cremations, 7507 State Route 5, Little Falls, corner of Bidleman Road. (315)508-5131.
To order memorial trees or send flowers to the family in memory of James W. "Jim" Eckler, please visit our flower store.