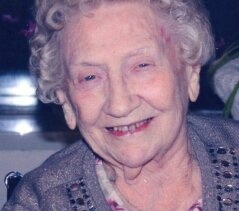 Ilion-Jennie M. (Abeline) Pettengill, age 90, of Ilion, widow of Raymond Pettengill, Jr., passed away peacefully on Monday, November 20, 2017 at Valley Health Services, Herkimer, surrounded with the love and support of her family. She was born on Sept. 17, 1927 in Herkimer, daughter of the late Charles and Cora (Parker) Abeline.  On April 14, 1951, she was united in marriage with Raymond Pettengill, Jr., in Saint Francis deSales Church, Herkimer. They first lived in Herkimer and moved to Ilion in 1987.  Mr. Pettengill passed away on Oct. 8, 2009. Jennie was last employed with Duofold, Ilion, where she was a seamstress.   Mrs. Pettengill was a lifelong Met fan.  She also enjoyed watching golf and any sport including the Olympics.  Jennie had a great memory and was a take charge woman.  Most of all, she loved spending time in the presence of her family, especially her grandchildren and great grandchildren.  Some of her favorite pastimes included going out to eat and trips to the casino. Surviving are her devoted family, two sons and their wives, William and Deborah Pettengill of Herkimer, Michael and Mary Jean Be Pettengill of Spencerport, NY, four daughters, Christine Pettengill of Herkimer, Patricia Scalise and her husband Michael of Herkimer, Susan Knapp and her husband David of Little Falls, Michele Sweet and her husband Michael of Herkimer, a brother in law, Alan Pettengill of Herkimer , nine adored grandchildren, many cherished great grandchildren, several nieces, nephews and a sister in law, Shirley Abeline.  She was preceded in death by her six siblings, Margaret, Barbara, Buster, Bill, Anna and Bunky.

Relatives and friends are invited to Mrs. Pettengill's funeral service commencing at 4 pm on Saturday, November 25, 2017 from the chapel of Daniel J. Enea Funeral and Cremation Care, 5860 State Route 5 (near St. Mary's Cemetery), between Herkimer and Little Falls, 315-508-5250, with her son in law, Michael Sweet, officiating.  Visitation will be held prior to the service on Saturday from 2-4 p.m.  She will be laid to rest in the spring of 2018 in Mountain View Memorial Gardens, town of Little Falls.  Kindly consider sending memorial offerings in Jennie's name to the Herkimer County Humane Society, Mohawk.  The family would like to thank the staff at Valley Health Services, Herkimer for their kindness and compassion shown to Jennie throughout her stay there.  Please click to the left to offer online memories.

To order memorial trees or send flowers to the family in memory of Jennie Mae (Abeline) Pettengill, please visit our flower store.