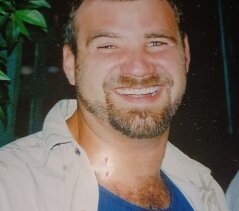 He was born on Dec. 29, 1980 in Herkimer and educated in Mohawk schools. He was predeceased by his grandparents Frank and Florence Harter; a sister, Angela (Hall) Zeigler; his stepfather, Charles Smith; an uncle, John Harter and by his aunt, Sandra Swartout. He is survived by his cherished family; his mother, Pamela Smith; a brother, James Albin Jr (Melissa).; his sister Catherine Broccoli (Aaron); his wife, Melody Hall and his adored daughters; Anna, Kaylie, and Kendra along with several nieces, nephews, and cousins.

John was a kind hearted, considerate person who loved his children and his family. He was there to help whenever there was a need and enjoyed spending time with the kids, whether it be playing games or teaching them how to do something. He was there to help cheer someone up with encouraging words of support, his quick wit and infectious laugh.

John and his family's care has been placed in the trust of Mohawk Valley Funerals and Cremations, 7507 State Route 5, Little Falls (corner of Bidleman Road), 315-508-5131. A celebration of John's life will take place at the convenience of the family. Burial will be private.
To order memorial trees or send flowers to the family in memory of John A. Hall, please visit our flower store.