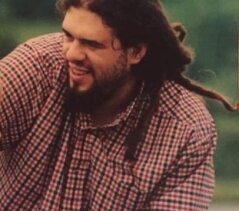 “He who marches out of step hears another drum.” Ken Kesey, One Who Flew Over the Cuckoo’s Nest John Matthew Lawrence Albrecht (1979-2017) was born into this world as he lived, in a blaze of light and love. He instantly became the best friend and treasured son of his parents and sisters as they traipsed the knolls and valleys of Hartsville Hill. His love for Jennifer, their children, his mother, father, and his sisters and their families will always sustain us. While John was in school at Alfred-Almond, he formed bonds he would draw upon for the rest of his life and earned a reputation as a kind friend who could always be counted on to be the Lord of Mischief. He came to the aid of family and friends as a natural advocate and seeker of justice. As an adult, John earned an A.A.S. in Human Services and a B.S. in Human Services Management from Alfred State College. As a student, John consistently made the Dean’s List and graduated Magna Cum Laude.  He was a member of Phi Theta Kappa, an honorary fraternity, and was the recipient of The United University Professions Link Scholarship for his historical research on the organized labor movement in the early twentieth century.  John served at The Hornell Area Concern for Youth where he organized a one-of-a-kind dodgeball tournament benefiting the children in their programs. John was able to invest time in his passion, the alleviation of the psychic pain of PTSD at the Veterans Administration in Bath, NY. John was known to be a guerrilla moving service when a neighbor woman came to his door saying she had a truck running in her driveway and needed to load her belongs before her husband came home with his guns. John loaded her truck quickly and off she went. Wherever he invested his energies there was a mutual exchange of warmth, love and respect. He met his beloved wife, Jennifer Lee Dodge in 1998, and he and Jennifer went on to have three wonderful children, Irie Kaya, Gwendolyn Elizabeth and Jax Roland John Jerome. John was most happy when at home, laughing with Jennifer while Irie, Gwen and Jax climbed on him playfully, with his arms wrapped around them in love. Jennifer and the children filled him with joy. John loved to spontaneously gather his children, nieces and nephews, the more the better, for outings to the cabin, an afternoon movie, camping, silliness and words of wisdom. The children were often trailing after him, he leading them on to another adventure. The most recent excursion included rides on the four-wheeler and frolicking in the hay mow at the Lyon farm.  John will be remembered by the entire generation of his children and nieces and nephews for happy excursions, with John’s arms wrapped around them, sharing his light and love.  A strong believer in the power of light and positivity, wild revelry and cosmic dance, John left the lives of many richer having known him.  He is remembered well by his in-laws. He was especially caring to his mother-in-law, Debbie Maglier. Jennifer’s extended family remembers John as an especially wonderful uncle and fantastic father. He leaves behind the love of his life, to whom he was married for 16 years, Jennifer Lee (Dodge) Albrecht, his precious children Irie Kaya (18), Gwendolyn Elizabeth (8) and Jax Roland John Jerome (4). His tremendously loving parents, Robert and Barbara (Ostrom) Albrecht, his devoted sisters, Molly Catherine Albrecht (Jordan Valdina) of Rhinebeck,  Katherine Rachel Albrecht Fidler (Chris) of Adams and loving nieces and nephews Sophia Albrecht-Valdina (6), Joseph Albrecht Fidler (11), Gabriel Albrecht Fidler (8), Maximillian Albrecht Fidler (3), Kaitlyn Stephens (20) , Madeline Stephens (18) and Jack Stephens (14), Natalie Dodge (12) and Savanah Gramling (7) and Neaveah Gramling (3). Family and friends will gather this Saturday, December 23, 2017 at Holy Family Parish Church, at the corner of John and Main St, Little Falls, NY, at 9:30 a.m. to pay respects followed promptly at 10 am for the Funeral Mass with the Rev. Terence Healy, officiating. The service will be followed by a meal and sharing of remembrances at the Elks’ Club, corner of Ann and Gansevoort Sts, Little Falls. In lieu of flowers, donations on the children’s behalf are welcome.  Mohawk Valley Funerals and Cremations, 7507 State Route 5 (town of Manheim), between Little Falls and St. Johnsville, 315-508-5131, has been entrusted with funeral arrangements.  Please offer online condolences by clicking to the left.
To order memorial trees or send flowers to the family in memory of John Matthew Lawrence Albrecht, please visit our flower store.