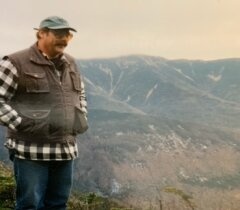 John Christopher Jeffers of N. Washington St., Rome, was called to the Lord at age 69 in the early morning hours of December 6, 2020 after a brief illness.

He was born in Albany, son of the late Christopher and Rosemary Jeffers and educated in Albany. He received a Master’s of Art from SUNY, a Bachelor’s of Arts from Skidmore and an Associate’s of Art from Hudson Valley.
John was a gifted teacher and worked for Catholic Charities as a residential manager and previously as a GED instructor for BOCES at Oneida County Correctional Facility. He produced one of the highest pass rates in the state for GED and was a meticulous record keeper, poetry writer, history buff and loved music.

John had a great deal of patience in dealing with students who were having difficulty with the learning process and received many letters thanking him, which he cherished. He was a devout Catholic who belonged to St. Peter’s Church in Rome. He belonged to the Men’s Bible Study Group, which would meet every Saturday morning.

Survivors include his wonderful friends from church, Father Sean P. O’Brien, Kyle Hill, Bruce Clifford, Dick Hoey and he leaves behind a long-time friend, Earl Stewart along with Julius Cummings and Jenn Stone. John had a creative family, which he leaves behind that he adored. Cary Wall was John’s right arm and if he needed anything, he could make it happen. He loved Cary like a son and they did everything together. John loved fishing, football, having dinners together, and spending time with Cary’s kids, Bianca, Chloe and Max. Cary’s mom, Yvonne Wall, was also a cherished friend and was always there for him even for his back surgery. She was his coach and baker. We all will miss this beautiful man that touched us all.

There are no calling hours. Relatives and friends are respectfully invited to John’s memorial Mass of Christian Burial commencing at 11 am at St. Peter’s Church, 200 N. James St., Rome on Wednesday, December 16, 2020 with the Rev. Sean P. O’Brien, Pastor, officiating. Burial will be private. Mr. Jeffers and his family’s care has been placed in the trust of Mohawk Valley Funerals and Cremations, 7507 State Route 5, between Little Falls and St. Johnsville, 315-508-5131. Please click above to add to his online tribute.
To order memorial trees or send flowers to the family in memory of John C. Jeffers, please visit our flower store.