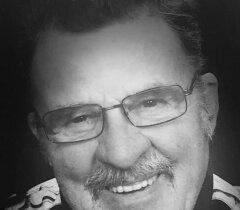 Holland Patent, NY-John P. Clark, 78, of Main Street, Holland Patent, passed away peacefully, Tuesday morning, at his home, with his loving family by his side. He was born on June 30, 1941, in Utica, the son of late Gordon and Cecelia Goodwin Clark and attended Whitesboro Central School District. John proudly served in the United States Navy from 1959 to 1963 and then continued his service in the United States Air Force as a heavy equipment operator, retiring after twenty years of service. On September 12, 1964, He married the former, Ruth Smith in St. Mark’s Church, Utica. Prior to John’s retirement, he was a drill rig operator for the NYS Department of Soils. Following his retirement, he enjoyed driving school bus for Holland Patent School District. John was a member of the First Presbyterian Church of Holland Patent, CSEA and the Holland Patent American Legion. In his spare time, he had a passion for the outdoors especially hunting, fishing, canoeing and kayaking. John’s greatest love was for his family and every moment spent with them made his life the most valuable. He was a wonderful man who everyone loved and will be missed dearly by his all of his family and friends. John is survived by his devoted wife of fifty-five years, Ruth, his daughters, Tammy Coe and husband, James of Remsen, Heidi Edwards and companion, John Arnold of Valley Falls and Mindy Minnig and husband, Robert of Westernville; his seven grandchildren and one great grandchild. He’s also survived by his sister and brother-in-law, Bertha and Lynn Paquette of Utica; his sister-in-law, Joyce Clark of Whitesboro and several nieces and nephews. John was predeceased by his brother, James Clark. His funeral service will be 5 p.m., Friday, January 24, 2020 at the First Presbyterian Church of Holland Patent, Church Street, with Pastor Susan Poole Soloman, officiating. Interment will be held privately at the convenience of the family. The family will receive visitors during calling hours from 4 p.m., Friday until the time of the services at the Church.  In lieu of flowers, the family has requested donations, in John’s memory, may be offered to Feed Our Vets, 195-205 Genesee Street, Utica, 13502 or the Stevens-Swan Humane Society, 5664 Horatio St, Utica, 13502.  John and his family’s care have been entrusted to Mohawk Valley Funerals and Cremations, 7507 State Route 5, Little Falls. (315)508-5131. To leave an online condolence or light a candle in John’s memory, please click above.
To order memorial trees or send flowers to the family in memory of John P. Clark, please visit our flower store.