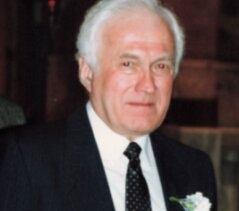 In the very early morning hours of January 28, 2021 my Dad's soul slipped the cord that bound him to Earth and took flight for home. Reaching his destination, he was, no doubt, joyously reunited with loved ones who were anxiously awaiting his arrival.

Born in 1925 in Bridgewater, NY, John was the eighth and youngest child of Peter and Anastasia Janicki. He and his six brothers and one sister spent their growing-up years on the family farm.

John graduated from high school in 1941. After graduation, while waiting for his Naval enlistment, his brother, Al, invited him to come to Detroit to work in his factory, Aeronautical Products, Inc. There was great excitement as his brother's company was in the process of developing a helicopter. Apparently my Dad, at the age of 16 and 17, made several contributions to the engineering of this craft. This helicopter eventually was built and flew successfully. His brother was impressed and wanted him to stay on at API to continue his work but my father was determined to, first and foremost, become a Navy pilot. His military enlistment began as a Naval Aviation Cadet in 1943 at Ohio Wesleyan. He was trained to fly bombers in Jacksonville, FL and served in active duty until 1947 when he proudly accomplished his goal of becoming a Naval Aviator. Upon his separation from the military, he returned to Bridgewater, NY.

In 1949 John was wed to Ilion native Mary Thompson in the Church of the Annunciation, where they remained as lifelong parishioners. They spent their married life in Ilion raising two children. During my Dad's work career he employed in a variety of manufacturing jobs throughout the area. He also served in various capacities as an Ilion Volunteer Fireman from 1956 until his passing.

John was predeceased by his wife Mary, son John and many family members and friends. He is survived by his daughter Jody and her companion Rudy Gadziala. There are numerous surviving relatives scattered throughout the states as well as a special niece, Jean Davis of Leonardsville and a special nephew, Mark Kasper of Bloomfield, Connecticut.

Those wishing to donate to a worthy cause might consider the Ilion Volunteer Fire Department c/o Jack Fitzer at 101 Fitzer Dr. Ilion, NY 13357, the Mohawk Homestead at 63 E. Main St. in Mohawk, NY 13407 ( my dad was very happy living there for a year), or to the Herkimer County Humane Society at 514 State Route 5S in Mohawk, NY 13407.

Sincere appreciation is extended to those who were so kind and good to my Dad at the Mohawk Homestead and at The Grand in Ilion. Thanks also to Richard Louis at the Veterans Affairs Office in Herkimer for all of your guidance and support. John and his family's care has been placed in the trust of Mohawk Valley Funerals and Cremations, 7507 State Route 5 (corner of Bidleman Road), Little Falls, 315-508-5131.
To order memorial trees or send flowers to the family in memory of John Joseph Janicki, please visit our flower store.