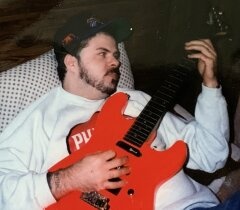 He was born to his mother, Lena Chrisman in Little Falls Hospital on September 18, 1969. John was raised in the Little Falls/Herkimer area and graduated from Herkimer High School. John had many occupations while supporting and spending as much time as possible with his family which was his greatest accomplishment. John had an astonishing ear for music, he used almost any genre to speak the thoughts he often could not put into words. He was an amazing guitarist, owning multiple guitars throughout his lifetime and although he may not have been the best at it, he would always sing his heart out and play “air drums” during jam sessions as if he was the only one in the room.

John never failed to have a smile on his face, even in his darkest moments. He was infectious when it came to laughter, he was known for cracking jokes or a sarcastic remark to make everyone else in the room smile along-side him. He came up with the quirkiest, funniest nicknames for everyone he held close to him as a way of showing his love. He had a way of coming across as a “tough guy,” but anyone who really knew him, knows he was a genuine, funny, extremely intelligent, caring, loving person who would slip into his tough guy costume to protect the people he loves, especially his family.

John was pre-deceased by his mother Lena Chrisman-Lutz and sister Cindy Mosher-Key. He is survived by the mother of his children: Kelly Mosher, his two sons: Jeffery and Joseph Mosher, his daughter: Halli Mosher, his granddaughter: Leonora Mosher, two sisters: Ruth Mosher and Debbie Mosher-Briggs, two brothers: Bud Mosher and Kristopher Lizotte, many aunts, uncles, nieces, nephews, and cousins as well as his best friend: Ray Salanco and many other close friends who will all live in memory of him.

There will be a Celebration of John’s Life on Thursday, October 29, 2020 located at the American Legion; 59 East Clark Street, Ilion, between the hours of 4 and 7 pm. John and his family's care has been placed in the trust of Mohawk Valley Funerals and Cremations, 7507 State Route 5 (corner of Bidleman Road), Little Falls, 315-508-5131. To offer a note of condolence to the Mosher family, please click above.
To order memorial trees or send flowers to the family in memory of John C. Mosher, please visit our flower store.