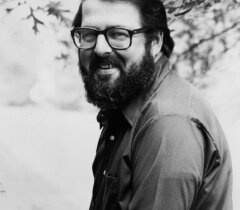 John P. DeHaan passed away at the age of 78, on Monday, November 15, 2021 at the Alpine Rehabilitation and Nursing Center, Little Falls, New York. He will be deeply missed by his family.

John was an industrial arts and woodshop teacher for several years before changing his career to operate a dairy farm in Herkimer, NY, until his retirement. He spent many hours in his basement woodshop creating early American furniture and thoughtful wooden pieces he gave as gifts that will be cherished forever.

In keeping with his wishes, there will be no services. The family will notify loved ones in the spring when a celebration of life is scheduled. John wished to spend his eternity hunting, fishing, trapping and enjoying the outdoors, so his ashes will be thrown to the wind near his favorite place at a later date.

If you are so moved, please consider a donation to the Alpine Rehabilitation and Nursing Center, or your favorite charity, in his name. John and his family's care has been placed in the trust of Mohawk Valley Funerals and Cremations, 7507 State Rotue 5, between Little Falls and St. Johnsville, 315-508-5131. Services are private.
To order memorial trees or send flowers to the family in memory of John P. DeHaan, please visit our flower store.