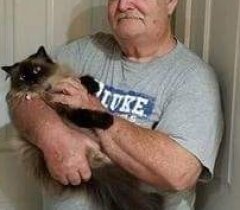 LITTLE FALLS – John Paul Rivenburg, 71, of Burt Road, passed away with family by his side, on Saturday evening, March 5, 2022, following a brief illness.

John was born Jan. 5, 1951, in Cooperstown, the youngest son of Clarence and Sylvia (Fellows) Rivenburg. He grew up in Herkimer and graduated from Herkimer High School "Class of 1969". Following graduation, John joined the United States Marines, where he served as a corporal in Beaufort, South Carolina, from 1969 to 1971. He received the National Defense Service Medal for his service and was honorably discharged following his years of service to our country. He was joined in marriage with Gail Braga on Feb. 2, 2002; the two enjoyed twenty years together, raising three children.

Upon returning to the Mohawk Valley, John began working for Niagara Mohawk in 1971. He stayed with the company, subsequently working for National Grid, as a gas mechanic foreman, until retiring in October 2014. John enjoyed his job and made many good friends among his coworkers.

John was an avid online chess and checkers player, competing against opponents from around the world and finding considerable success. He loved animals and plants, owning many of both over the years, and had a special fondness for cats. Family played an important role in John’s life. He was always very involved and interested in the lives of his family members, and also in his family genealogy.

In lieu of flowers, the family is asking donations be sent in John's memory to the Herkimer County Humane Society. A celebration of life will take place at the convenience of the family, where military honors will be accorded. Arrangements for cremation are under the direction and care of Mohawk Valley Funerals and Cremations, 7507 State Route 5, Little Falls (corner of Bidleman Road), 315-508-5131. A celebration of John's life will take place on Monday, March 14, 2022 from 5-7pm at the Little Falls Elk's Lodge.
To order memorial trees or send flowers to the family in memory of John Paul Rivenburg, please visit our flower store.