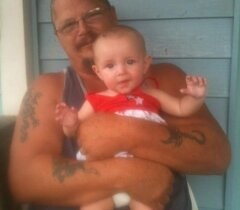 LITTLE FALLS, NY-Tom R. Jones, Jr., 53, of Little Falls, passed away peacefully, Thursday, May 29, 2019, at his home with his adoring family by his side, following a courageous battle with illness.  He was born on November, 12,1965 in Little Falls, son of the late Thomas R. and Loretta A. Fuller Jones, Sr. and was educated with Dolgeville schools. Tom was employed with Helmont Mills in Saint Johnsville, until he became ill. On September 28th ,1985 he married the former Deborah S. Leon, in Salisbury. He is survived by his wife Deborah (Debbie) of Little Falls; his children, David A. Jones of Little Falls Kati C.Jones of Fort Plain and Amber R. Jones of Little Falls; seven grandchildren; many nieces, nephews, brothers and sisters. Tom was a family man who enjoyed spending time with his family, especially his grandchildren. He also enjoyed the outdoors and had a talent for drawing. In keeping with Tom's wishes there will be no visitation. The family will hold a celebration of life at the Little Falls Elks Lodge #42 on Sunday, June 23, 2019, from 1-4 p.m. A heartfelt thank you is extended by the family to Hospice & Palliative Care for their guidance through this difficult time. Tom's funeral arrangements have been entrusted to the care of Mohawk Valley Funerals and Cremations, 7507 State Route 5 (Town of Manheim) between Little Falls and St. Johnsville, 315-508-5131. Please click above to offer a note of condolences or light a candle.
To order memorial trees or send flowers to the family in memory of Jr. Thomas R. Jones, please visit our flower store.