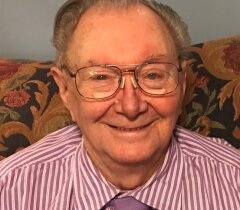 George J. Rosenberger, Jr. - Stratford, NY     George J. Rosenberger, Jr., 89, of Stratford, NY, passed away peacefully on Wednesday, January 1, 2020, at the Utica Abraham House with his loving family by his side, following a long illness. He was born on May 6, 1930, in Queens, NY, the son of the late George J. and Lillian Maguire Rosenberger Sr., and was educated in Queens schools where he learned his vocation as an artist. George proudly served in the United States Army Signal Corps during the Korean War as an instructor and illustrator. He also served 6 years in the Army Reserves. His best friend and fellow soldier, Dale, introduced him to his little sister Clare Haygood. George and Clare were married on September 4, 1954 in Alexandria, VA. They settled in Bloomingburg, NY, where George pursued his 30-year career as a commercial artist for Channel Master Electronics in Ellenville, NY. In later years, he also did freelance art work as an illustrator for “Thomas the Train” cartoons and toys. Over the years, George participated in Boy Scouts, hunting, archery, go-carting, 4H instruction, barbershop choral group, Meals-on-Wheels delivery, and of course, photography, painting, and illustrating projects. George was also a radio-controlled model airplane enthusiast. His interest became so great that he founded his own “RFD Hobbies” shop, a neighborhood fixture for many years. In his free time, he enjoyed reading, watching westerns, and crossword puzzling. He was a member of Dolgeville Christian Fellowship. George is survived by his loving wife of 65 years, Clare; his children and their spouses, George J. and Kathy Rosenberger, III of North Carolina, Suzanne and Jeffrey Ecker of Stratford, Grace and Robert Krenrich of North Carolina; and his 13 grandchildren, including his special caregiver, Becky Ecker and eight great grandchildren. He is also survived by his niece and her husband Debbie and Steve Moomey of Maryland and his cousin, Julie Umina of New York. George’s celebration of life will be held at Dolgeville Christian Fellowship on February 2nd at 12:30pm, following regularly scheduled service. With Pastor Marvin Isum officiating, full military honors will be presented. Interment will be held privately at the convenience of the family. Contributions in his memory may be offered to Dolgeville Christian Fellowship, 3 Elm St, Dolgeville, NY 13329, with a notation for the “GJR Handicap Entrance Fund”. George and his family’s care have been placed in the trust of Mohawk Valley Funerals and Cremations. To leave a message of condolence or to light a candle, please refer to the above tabs.
To order memorial trees or send flowers to the family in memory of Jr. George J. Rosenberger, please visit our flower store.