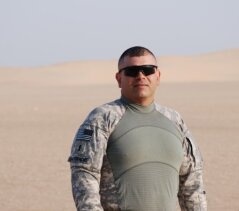 Little Falls, NY-Christopher Santopadre, Jr. passed away in the early morning hours of March 5, 2017, at his home in Covington, LA at the age of 47.  His passing occurred after a long hard fought battle with brain cancer.  Chris was born in New Orleans, LA and spent most of his life in Little Falls, New York and Covington, LA.

Chris spent his teenage years in Little Falls, NY where he graduated from Little Falls High School in 1989.  Christopher Santopadre. Jr. was a very proud solider who served his country well in the Louisiana Army National Guard from 1996 to 2012.  He served in numerous Command Posts with the last Command Post Being HHC 256th Infantry Brigade in Lafayette, Louisiana.  His last rank was served as a First Lieutenant. In 2003, he was deployed to Afghanistan with the 205 Engineer Battalion and in 2010 he was deployed to Iraq with the 928th Sapper Company.  He received many honors during his military career such the National Defense Service Medal, Global War on Terrorism Expeditionary Medal, Global War on Terrorism Service Medal, Iraq Campaign Medal with Campaign Star, Army Service Ribbon and the Armed Forces Reserve Medal with M Device.  Chris was an accomplished wood craftsman by trade but later found his true passion in scuba diving whether he was working as a commercial diver on the Lake Pontchartrain Causeway as an underwater bridge inspector or becoming a technical diver and later he earned his scuba instructor credentials with PADI.

Relatives and friends of the family are invited to attend the funeral services at St. Anselm Catholic Church, located at 306 St. Mary Street, Madisonville, LA on Saturday, March 11, 2017. Viewing and visitation is 9:30 am with the service beginning at 10:30 am.  In lieu of flowers, a donation can be made to St. Tammany Animal Resource Team at STARTFOSTERS.COM Memorial donations may be made to Ugift525.com, use code 277-C85, for Luke Santopadre’s college fund. Daniel J. Enea Funeral and Cremation Care, 5860 State Route 5 (near St. Mary's Cemetery), between Little Falls and Herkimer, is handling all local funeral arrangements. For any questions, you may contact Dan Enea at 315-508-5250.

To order memorial trees or send flowers to the family in memory of Jr. Christopher Santopadre, please visit our flower store.