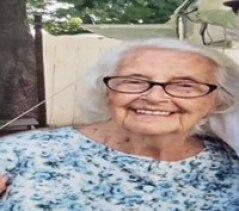 Mrs. Kathryn (Abeling) Frasier Sanders, age 93, of School Street, Nelliston, passed away peacefully on Friday morning, May 20th, 2022 in the comfort of her home, in the presence of her beloved husband, Lee W. Sanders, Sr.

Kathryn, known by all as Kathy, attended Canajoharie schools. She married Miles Frasier, Jr. in October of 1948, just before his deployment in the U.S. Army. They moved to the Oakland, CA area during his 4-year tour of service. Kathy worked for the Southern Pacific Railroad, until 1952. Upon returning home to Palatine Bridge, Kathy started a long career in the traffic department for Beech-Nut in Canajoharie, before retiring in 1984. Kathy and Miles started growing roses in California and upon returning home started a rose garden that eventually grew to over 600 bushes. Kathy was a long-time member of the American Rose Society, a charter member of the Mid-Town Ambulance Corps. in Canajoharie, serving as EMT, dispatcher, president and chief dispatcher.

Kathy was also a member of the American Red Cross, helping those who had fires or other disasters. She was a long-time member of the Canajoharie Moose and was active in politics, and as husband Miles, was a 24-year Town of Palatine supervisor. In 1978, Kathy and her husband Miles along with their son, Ron, started Frasier's Florist and Greenhouse, which flourished until Miles’ death in 2012. She continued to wait on customers and make deliveries well into her 80’s. Kathy married Lee Sanders, Sr. on January 16, 2016, and stayed faithfully by his side until the day of her passing. Kathy was a member of the Amazing Grace Baptist Church, where she attended faithfully until her health began to fail. Family was so important, and her life revolved around family and friends. She was loved and adored by all, her smile and laugh were contagious, and she will be greatly missed by all her life touched.

Funeral arrangements are under the direction and care of Mohawk Valley Funerals and Cremations, 7507 State Route 5, Little Falls (corner of Bidleman Road), 315-508-5131. In respecting Kathy's wishes, there are no calling hours. Relatives and friends are respectfully invited to a graveside service, commencing at 1 pm on Tuesday, May 24, 2022 at Sand Flats (Evergreen) Cemetery, Fonda, NY with the Rev. Frank Calabrese, pastor of Amazing Grace Baptist Church, Ft. Plain, officiating. For those who would like to take part in the funeral procession, please gather at the family home at 6 School Street on Tuesday at 12 noon in Nelliston.
To order memorial trees or send flowers to the family in memory of Kathryn (Abeling) Frasier Sanders, please visit our flower store.