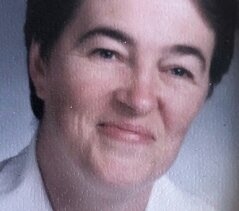 Mrs. Kathy M. Drumm, 72, of 15 W. Center Street, Mohawk, passed away peacefully, April 2, 2020, at her home in the loving surroundings of her family, following a brief illness.

She was born August 6, 1947, in Utica, the daughter of the late Lloyd and Marguerite Hibbard Jackson. Kathy was a graduate of Sauquoit Valley High School. She was proud, after raising her children, that she was able to graduate from St. Elizabeth’s School of Nursing in May of 1991 with her RN. On October 19th, 1963, Kathy married Richard A. Drumm in the Herkimer Methodist Church.

Kathy started her career at St. Elizabeth Medical Center, Utica then to the former Van Allen Nursing Home, Little Falls. She continued her career with Herkimer County Public Health Office of Early Intervention. She was a member of the Grace Episcopal Church, Mohawk, where she was active with the Episcopal Church Women. For a time, Kathy volunteered with the American Red Cross. In her free time, she was a talent with ceramics, creating many gifts for her family over the years. She also enjoyed gardening, camping and baking with her grandchildren. Kathy’s most joy came from spending time with her family and being all she could be for them. She also had a great love for her fur family.

Kathy is survived by her devoted husband, Richard; her sons and daughter-in-law, Andrew and Molly Drumm of Dolgeville and Robert Drumm and his companion, Shari Martin of Watertown; her special niece whom she raised as her daughter and her husband, Lori and Stephen Smith of Ilion; her grandchildren, Robert Drumm, Deanna Drumm, Zachary Smith, Zane Smith, Andrew Drumm, Alexis Drumm, Zoey Smith, Jordan Drumm and Dylan Drumm; her brothers and sister-in-law, Kirk and Lynn Jackson of N. Carolina and Mark Jackson of Tennessee; her close friends, Marilyn Bridger and Jean Russell; several nieces, nephews and cousins. She was predeceased by her brother, Francis Jackson and her sister Sue Kinville.

Her celebration of life will take place at a later date at the convenience of the family. In memory of Kathy, the family has requested donations be offered to the Herkimer County Humane Society or MOVAC.

Kathy and her family’s care have been placed in the trust of Mohawk Valley Funerals and Cremations, 7507 State Route 5, corner of Bidelman Road, between Little Falls and St. Johnsville. To plant a tree or add a not of condolence, please follow the tabs above.
To order memorial trees or send flowers to the family in memory of Kathy M. Drumm (Jackson), please visit our flower store.