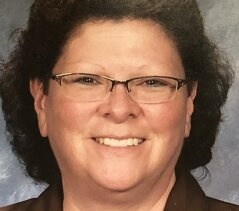 Mrs. Marie Domonica (Fiore) Squillace, of Shells Bush Road, entered into eternal rest peacefully on Thursday afternoon, October 8, 2020. Her passing ended an eight-year battle with Stage IV Lung cancer with the love and support of those she loved most by her side.

Marie was born on November 1, 1955 in Utica, she was the daughter of the late Nicholas A. and Margaret E. Fiore. She graduated from St. Francis DeSales High School class of 1973. On November 30, 1996 she married her best friend and soulmate, Timothy (Tim) Squillace. They were always together, taking one day at a time, traveling and enjoying their life with family and friends. Throughout her working career, Marie had a strong work ethic. She was employed by MetLife for 40 years, until her illness forced her to leave in 2013, with a formal retirement in 2015.

During Marie’s spare time she enjoyed gardening, DIY projects and anything her grandchildren were involved in. This included sports, concerts and morning program at school. Murray was a proud member of the Morning Program Grandmas. Marie’s family and friends relied on her for her creative ideas and suggestions. Marie was a great organizer.
Marie enjoyed going to Flea Markets, Antique Shows in Arts and Crafts Fairs. two of her favorite events were the annual Bouckville Antique Show and the Remsen Barn Festival. She had an eye for finding furniture pieces that others would have tossed out and turning them into brilliant household items.

Marie is survived by her devoted husband Tim, loving son James Santucci, her cherished grandchildren Chase, and Adrianna Santucci and her K-9 boy Angelo.Marie was predeceased by her father, Nicholas Fiore on July 13, 1982, her brother Vincent Fiore on November 25,1985 and her mother Margaret Fiore on December 24, 2005. Throughout Marie’s life she encountered an amazing amount of lifelong friends. Those friends have remained in Marie’s life as far back as the 1960’s. They are; Francesca Mastroianni Grimmer, Vinicia DeFazio, Elaine Geary, Loretta Costelli, Lauren Fallon, Nicholas DeGiglio, Carole Fedor and Rochelle Grande.

Marie’s dream came true in January of 2020 when she witnessed her granddaughter Adrianna receive the Sacrament of Baptism. She also attended Chase and Adrianna’s First Holy Communion in June 2020.

Her family would like to thank Dr. Sultana Razia, Minela Andelisa and the office staff for the attention given to Marie throughout the years. The nurses working in the Infusion Room were not only professional health care workers, they were her friends. Thank you, Sharon, Darrin, Kelly, Heidi, Charlene, And Barb. We would also like to thank Dr. Pourushasp Dhabhar and his office staff.

In accordance with Marie's wishes her family will celebrate her life privately. A memorial mass will be held at a time to be announced. In lieu of Flowers please consider donating in Marie’s memory to St. Jude Children’s Research Hospital. Marie and her family's care has been entrusted to Mohawk Valley Funerals and Cremations, 7507 State Route 5 (corner of Bidleman Road), Little Falls, 315-508-5131. You may offer condolences by clicking above. There are no calling hours.
To order memorial trees or send flowers to the family in memory of Marie Domonica Squillace (Fiore) Mrs., please visit our flower store.