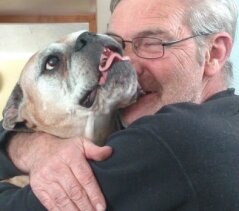 Little Falls/Mohawk, NY-Mr. Marvin L. Failing, age 68, of State Route 169, town of Little Falls, a former longtime Mohawk resident passed away peacefully on Thursday evening, Dec. 27, 2018 at Little Falls Hospital.  At the time of his passing, he had the love and support of his loved ones at his bedside.   He was born in Fort Plain on Sept. 12, 1950, son of the late George and Lula (Williams) Failing and educated in Fort Plain schools.  As a young man he worked at Beech Nut.  Mr. Failing was last employed with Richard Obreza Trucking as a truck driver, following his retirement from Remington Arms where he was employed for numerous years.  In his later years he served as a funeral attendant at the Applegate Funeral Home, Ilion. Marvin loved being with his dog, Myles and taking him for rides in his truck.  Marvin loved country music and singing.  He was a people person always enjoyed making people laugh.  To know Marvin was to love him.  He always enjoyed the outdoors and working around the house and helping his family with chores.  He was of the Lutheran Faith. Survivors include his beloved children; daughter, Tina Fort of Frankfort and son, Paul Failing of Little Falls; his former wife, Donna Bailey of Ilion; siblings, Don Failing and wife Mila of Ft. Plain, Neil Failing and wife Mable of Ft. Plain, Katherine Mosher and husband Howard of Ft. Plain; cherished grandchildren, Abigail Vail, Morgan and Brett Fort; his great grandchildren; many nieces, nephews and cousins.  He was preceded in death by his siblings, Clifford, Chuck, Bob, Blanche and George, by his daughter in law, Brenda Vail and by his son in law, Thomas Fort, Jr.   There are no calling hours.  Relatives and friends are respectfully invited to a graveside service commencing at 11 am on Friday, January 4, 2019 in Armory Hill Cemetery, Ilion.  Kindly consider memorial offerings in his name to Joseph's Experience (for children impacted by cancer and leukemia), PO Box 522, Whitesboro, NY 13492.  The family would like to offer their heartfelt gratitude to the doctors, nurses and staff at Little Falls Hospital for their kindness and compassion.  Mohawk Valley Funerals and Cremations, 7507 State Route 5 (corner of Bidelman Road), between Little Falls and St. Johnsville, 315-508-5131, has been entrusted with funeral arrangements.
To order memorial trees or send flowers to the family in memory of Marvin L. Failing, please visit our flower store.