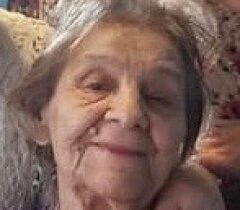 Mary Proni - Utica Mary Proni, 95, of Utica, passed away peacefully, Thursday, December 12, 2019, in St. Elizabeth Medical Center, with her loving family by her side, following a brief illness. She was born Decmeber 10, 1924, in Lviv, Ukraine, the daughter of the late Theodore and Polly Lesjka. During World War II, Mary was made to work on a farm in Austria. On July 20, 1945, she married William Proni, Sr.. The couple came to the United States in 1949 where they settled in Utica. Mr. Proni passsed away in 2003. Mary had a great love and passion for the United States and was very thankful for being able to raise her family here. She was a devoted member of the Ukrainian Catholic Church of St. Volodymyr and its Mother’s Club. Mary loved her church family and enjoyed volunteering for many years. She was an excellent cook, well known for her apples squares and many other traditional Ukrainian dishes. Mary’s family was her life, especially caring for her son, Mikey. Michael passed away, Wednesday, December 11, 2019, the day before Mary went to be with God. Her role as the matriarch was one she always was proud of and instilled that pride in the hearts of all her loved ones. Her presence will be sorely missed but her memories will be carried on forever. Mary is survived by her son and daughter-in-law, William and Marilyn Proni, Jr. of New Hartford; her daughter and son-in-law, Rose and John “Jack” Lynch of Ilion; her grandchildren; Dr. Frederick and Terrie Proni of Hickory, NC, Paul and Marcia Lynch of Ilion and Lindsay and Robert Jordan of New York Mills; her great grandchildren, Lincoln and Payton Lynch and Jemma, Jayla and Janeva Jordan. She also leaves a sister and many nieces and nephews in the Ukraine. Mary was predeceased by her sons, John Proni and Michael Proni; her daughter and son-in-law, Mary Lou and Charles Davis and many siblings in the Ukraine. Mary’s and Michael’s funeral will be 10:30 a.m., Monday, December 16, 2019, at the Ukrainian Catholic Church of St. Volodymyr the Great, 4 Cottage Place, Utica, where the Mass of Chrstian Burial will be celebrated by the Very Rev. Michael Bundz. Interment will follow in the Ukrainian Catholic Cemetery of St. Volodymyr where they will be laid to rest on the family plot. There will be no public visitation. The Proni family’s care has been entrusted to Mohawk Valley Funerals and Cremations, 7507 State Route 5, Little Falls.(315)508-5131.
To order memorial trees or send flowers to the family in memory of Mary (Lesjka) Proni, please visit our flower store.