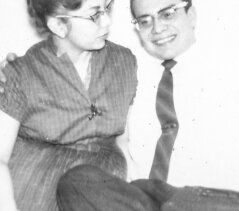 Mr. Michael E. Saez, 83, of Piseco Road, Stratford and formerly of New York City, passed away peacefully, on Saturday, November 14th, 2020, in his home, joining his wife Marie, in Heaven.

He was born on October 2, 1937 in Puerto Rico, the son of the late Monserrate and Carmen Rita Saez. On September 6, 1958, Michael was united in marriage with Marie Viera in New York City. The couple then settled in this area on July 4, 1975, fulfilling their dream to live in rural New York. He was last employed with Remington Arms, Ilion.

Michael is survived by his devoted family, his daughters, Lynn August of Amsterdam, Ginny and James Rogers of Mohawk and Misha Saez of Sedona, AZ; he also leaves four grandchildren and seven great grandchildren and his sister, Marie.

In keeping with Michael’s wishes, all services and burial will be held privately at the convenience of the family. Contributions may be offered to the charity of your choice in his name. Michael and his family’s care have been placed in the trust of Mohawk Valley Funerals and Cremations, 7507 State Route 5, Little Falls (Town of Manheim), 315-508-5131. Please click above to add to his online tribute.
To order memorial trees or send flowers to the family in memory of Michael E. Saez, please visit our flower store.