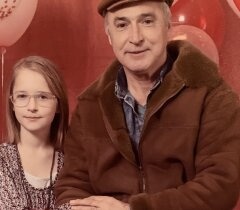 On Sunday evening September 19, 2021 Michael Andreev, Sr. (67) and his daughter Sofia Trusova (12) were tragically and unexpectedly killed in a domestic violence incident at their home. Together they have joined our Father in Heaven and will be forever in the hearts of their family.

Michael was born on August 6, 1954 in Sofia, Bulgaria, the son of the late Stefan Ivanov Andreev. Michael attended school in Bulgaria and later joined a youth military academy. Michael immigrated to the United States from the former communist of Bulgaria in 1987. Michael was a talented artisan who owned and operated the Jordanville Monument Company in Jordanville, N.Y. Michael was very proud of the beautiful family home, which he designed and built from the ground up. The home included a number of bespoke elements including a stone fireplace and a sauna, crafted in traditional Bulgarian style. On July 4, 2021, Michael married his now widowed wife Elena Andreeva in St. Petersburg, Russia.

Sofia was born on July 30, 2009 in Moscow, Russia, the daughter of Michael Andreev Sr. and Elena Trusova. Sofia came to the United States in 2015 at age five. Sofia attended Owen D. Young Central School in Van Hornesville, N.Y. Sofia was a beautiful and intelligent young lady who was a shining light in a family full of brothers. She enjoyed spending time with her friends and recently started playing soccer at school.

Above all, Michael and Sofia loved spending time with their family, whether it be traveling or just relishing a traditional Bulgarian meal in their home. While they both loved their homeland, they were also proud to be Americans and were grateful for the opportunities they were granted. They were both members of the Russian Orthodox Community in Jordanville, N.Y.

Surviving family members include sons, Stefan Andreev (20), Christian Andreev (18), Ivan Andreev (9), and Michael’s newly-wed wife Elena Andreeva (48). They were both predeceased by Stefan Ivanov Andreev and Iordanka Mihailova Andreeva. The family would like to thank the Holy Trinity Monastery and the local Jordanville Community for their love and support during this extremely difficult time.

Memorial services will be held on Wednesday, September 29, 2021, from 1:00 p.m. until 2:30 p.m. at the Holy Trinity Monastery in Jordanville, N.Y. A reception for Michael will be held immediately following the service. Michael will be laid to rest in the country of Bulgaria at a later date. DUE TO CIRCUMSTANCES OUT OF THE FAMILY'S CONTROL, SERVICES FOR SOFIA ARE BEING DELAYED. Michael and his family's care has been placed in the trust of Mohawk Valley Funerals and Cremations, 7507 State Route 5 (town of Manheim), Little Falls, 315-508-5131.