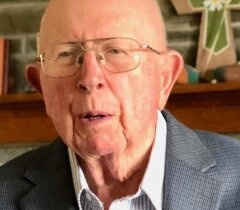 Mr. George E. Capek, PhD, age 89, of Herkimer, formerly of Oppenheim, passed away peacefully on Sunday morning, April 3, 2022 at the St. Luke's Campus of the Mohawk Valley Health System, New Hartford, following a brief illness. At the time of his passing he was surrounded by those who loved and cherished him.

Survivors include his wife of 62 years, Nancy of Herkimer; and their six children, Frank (Janice) Capek of Atlanta, GA; John (Carla) Capek, PhD of Saratoga, CA; Tom (Lisa) Capek of Corning, NY; George (Leslie) Capek, Jr. of Novi, MI; Jeanne (James) Girardy, MD of Long Valley, NJ; and Joanne (Ron) Young of Oppenheim, NY. He was the proud grandfather of twenty-two grandchildren and a recent great-grandfather of two. He was predeceased by his parents Frank and Teresa Capek, brother Frank Capek, sister Emily Albrecht, and grandsons Daniel and Dominic Capek.

George was born on March 18, 1933 in Manhattan, NY to Frank and Teresa Capek. He was the youngest of three children. His brother Frank proudly served and died in WWII. George graduated from the NY Military Academy and then received his Bachelor degree from CW Post. George continued his education receiving a Masters degree from New York University and a PhD from Columbia Pacific University. He was employed as a professor of Aeronautical Engineering for 40 years at the College of Aeronautics, New York, NY. George was united in marriage to Nancy Elizabeth on September 1,1959 in Jackson Heights, NY. They first settled in Syosset, NY before moving upstate in the early 1970s. After the move, George commuted into the city each week for work, while enjoying all the benefits of living in the country.

George was very active in the communities in which he resided. He joined the Syosset Volunteer Fire Department and served as Captain from 1969-1972. He also joined the Matinecock Lodge as a Mason in which he remained an active member for 50+ years. George continued his involvement with the Masons when he moved upstate and joined the Ziyara Shriners. He proudly participated in their clown training program so he was able to take part in the Ziyara Shriners Circus and even purchased a clown car to drive in various Shriner events.

Upon retirement from his teaching position in NYC in 1996, George became active in local town activities; first being elected as Oppenheim town assessor and then elected the Town of Oppenheim Supervisor from 2008-2014. He also was an avid coin collector and hobby farmer.

Services will take place at the St. Johnsville Cemetery early this summer, at a date to be determined. There are no calling hours. Contributions in his name can be offered to the Foltsbrook Center for Nursing and Rehabilitation,104 N. Washington St. Herkimer NY. The family would like to thank the staff of the Foltsbrook Center for their loving care of George over the past two years.

Cremation arrangements are under the direction and care of Mohawk Valley Funerals and Cremations, 7507 State Route 5 (between Little Falls and St. Johnsville), 315-508-5131.
To order memorial trees or send flowers to the family in memory of Mr. George E. Capek, PhD, please visit our flower store.