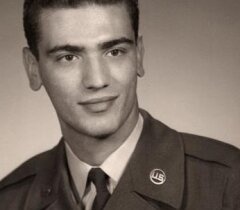 Herkimer NY – Philip Carl Vallese, age 81, born in Herkimer NY and beloved husband of Dawn (Stone) Vallese entered into eternal life, on Wednesday morning November 28th 2018, following a long battle with cancer and heart disease. He was surrounded by family in his home on Exchange Street as he passed peacefully. Mr. Vallese was a United States Air Force Veteran. Born in Herkimer NY on August 9th, 1937, son of the late Armando Vallese and Elvira (Celi) Vallese of Herkimer and he graduated from Herkimer High School. Philip served in the United States Air Force during the Korean War where he served in Japan. Following his honorable discharge from the Air Force, he earned his Bachelor’s Degree from Syracuse University and began his career in technology at Kodak in Rochester, NY, where he settled. Philip would quickly find his home at Xerox and built his career as a computer programmer.  Philip and Dawn married and built their life in Rochester and soon welcomed two boys to their family. Philip enjoyed special times with family and extended family. Never forgetting his roots the family visited Herkimer often and in retirement settled back there to live out their lives. He will be remembered for his dedication to special needs son, Steven, and his involvement with Steven in the Special Olympics. Philip will also be remembered for his generosity to the whole family as he was a true patriarch. In the years following his retirement Philip enjoyed his wood working shop and crafted numerous mementos that the family will treasure for years to come. Philip was loved by all and will be very missed. He is survived by his loving mother, Elvira (age 107), his wife Dawn of 52 years, sons, Raymond (Valerie) and Steven, grandchildren, Trevor and Delaney, his beloved sister, Joanna Sementilli, nieces and nephews, John (Stacy) Sementilli, Dave (Lori) Sementilli, Anthony (Lisa) Sementilli, Lisa (Duane) Mayo, John Sementilli Jr, Philippe (namesake) Mayo, Joel LaPuma, Giovanna Sementiili, Gabrielle Sementiili, Ashley(Chris) Putney, Marissa Farber (Dustin) and Alisha (Ermin) Muratovic. Phil is also survived by beloved cousins Carla (Vallese) (Frank) Aiello and Donna (Vallese) (Glen) Sietzma. There will be a Mass of Christian Burial at Sts. Anthony and Joseph Church, South Main Street, Herkirmer NY, commencing at 9AM on Monday, December 3, 2018 with the Rev. Quy Vo, officiating. Relatives and friends are respectfully invited to attend. In respecting Philip's wishes, there are no calling hours. Committal service will follow in Oak Hill Cemetery, Herkimer where military honors will be accorded. Please click above to add to his online memorial.
To order memorial trees or send flowers to the family in memory of Philip Carl Phil Vallese, please visit our flower store.

Church of Sts. Anthony and Joseph