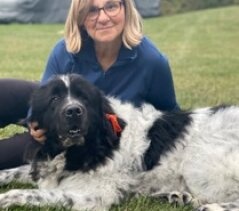 On April 22, 2021 we lost Phyllis Spohn-Bates after a short battle with Acute Myeloid Leukemia (AML) with her loving family by her side including husband Terry, the love of her life for many years. Phyllis was a mother, grandmother, wife, aunt, friend, athlete, warrior, and mentor. Beyond that, Phyllis was a force and the impact she had on all those that were lucky enough to bask in her light will live on forever through them.

Phyllis was born on September 27, 1955 in Ilion, New York. She was the daughter of Salvatore and Victoria (Carnavele) Spohn. She was one of three children and Ilion was the place she called home and where she raised her three sons Roland, Jared, and Adam. A graduate of Frankfort-Schuyler High School in 1974, Phyllis went on to earn her Associate's Degree from Mohawk Valley Community College. Her degree was in Human and Social Services and it was in that field that Phyllis thrived in many jobs throughout her life.

Through the many facets of Phyllis' life, she was always Phyllis. She was loved in every circle of her life and she will be missed by all that knew her and were lucky enough to know her. Her life for many years was dedicated to her boys and Alexus Ho-Binns, who she cared for from a young age on. Phyllis never missed any of their sporting events and put her personal interests on hold as her family was always her first and foremost priority, pride and joy. As her boys went off on their own to pursue their own careers, Phyllis picked up her love affair with the outdoors and became an avid hiker, bicyclist, and runner. Terry joined her on many adventures including introducing her to motorcycle rallies and road trips as he proved to be her long lost soulmate.

Phyllis hiked with friends and family, took part in multiple Rides for Missing Children and soon became an avid runner. Phyllis joined the Utica Roadrunners Running Club and she soon found herself running multiple races and part of the Rockin' Chics runners. Not long before she became ill, Phyllis was getting in her final miles of the year to get her coveted Red Jacket from the Utica Roadrunners. The Red Jacket is a symbol of accomplishment that comes with running 1,000 miles in a calendar year and volunteering for multiple club events. She sadly was never able to receive her jacket as it will be awarded to her family posthumously.

Phyllis was also an avid lifelong lover of animals-especially dogs. Through her work at The Herkimer County Humane Society, Phyllis was able to create her Lovin' Spoonful Pet Sitting Services. There were never enough dogs in Phyllis' life and she could often be seen at any hour of the day walking multiple dogs at the same time. Phyllis never turned down a request to walk a neighbor or friend's dog or take care of them for an extended amount of time. Her dog Shea was one of her most loyal and true friends.

The loss of Phyllis will leave a void in many people's lives that will never be filled. The many memories and her final battle with AML is something that can be never taken away. During her struggle, the Utica Roadrunners held a benefit event in her honor and the hashtag #PhyllisStrong became a battle cry for Phyllis and all that knew her. She is survived by the many who loved her. She is survived by her husband Terry Bates, who she married on September 16, 2017. Also surviving is her sister Rosemary and her brother-in-law Bill Parody, brother Michael and his wife Karin Spohn, sons Roland Hall, Jared and his wife Rebecca Hall and son Adam Hall. Phyliss was also a proud stepmother to Matthew and Rachel Bates, and Jennifer and husband Scott Guerra.

Her pride and joy were her grandchildren and nothing made her happier than watching their many events and activities. Those grandchildren include Alayna Hall, Little Adam Hall, Camden Hall, Aiden Hall, Harper Hall and her step grandchildren Kayla Bates, Adalyn Bates, Eli Bates, Lainey Bates, Jacob Guerra, and Sophia Guerra. She is also survived by many nieces and nephews that include Vickki Lynn and husband Craig Kaufman, Chris Parody, Martina and husband Andy Jory, Michael and wife Montessa Spohn, Sam Spohn, and Joe (favorite nephew) and Julia Spohn.

Phyllis also leaves behind many Grand Dogs and countless friends from her many circles and interests. Phyllis had an infectious smile and an ability to make every person she knew feel like they were her best friend. Phyllis would want people to continue to fight and find a cure to beat AML. Phyllis and her family's care has been placed in the trust of Mohawk Valley Funerals and Cremations, Little Falls. On behalf of the family, many thanks to the wonderful doctors, nurses and staff from Faxton-St. Luke's and Strong Memorial Hospital in Rochester, New York that worked with Phyllis through her battle.

Phyllis' funeral service will commence at 4 pm on Saturday, May 1, 2021 from the chapel of Mohawk Valley Funerals and Cremations, 7507 State Route 5 (corner of Bidleman Road), Little Falls, where her life will be celebrated. Relatives and friends may pay their respects also on Saturday, May 1st, from 12-4 pm, prior to the funeral service at MVFC. Burial will take place privately in Mt. Olivet Cemetery, Frankfort at a date to be determined later. Due to the current COVID-19 pandemic, a facemask is mandatory inside the business and social distancing is required
To order memorial trees or send flowers to the family in memory of Phyllis Spohn-Bates, please visit our flower store.