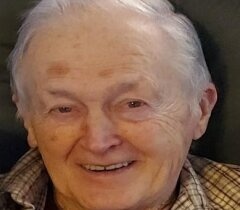 Ralph Harold Farrington Jr., 85, of Middleville, beloved husband of Carol Ann (Mosher) Farrington passed away peacefully on Wednesday, June 9, 2021 at St. Luke’s Campus of the Mohawk Valley Health System, Utica, surrounded with the love of family at his bedside.

Ralph was born on June 27, 1935 in Middleville, son of the late Ralph and Bernice (Orlowski) Farrington Sr. He received his education in the Middleville schools and spent many years working hard for several local businesses to support his family before his much-deserved retirement. On July 1, 1967 he married the former Carol Mosher and with lots of dedication, hard work and love they raised their family together on Castle Road.

Ralph was a devoted husband, father, brother, grandpa, uncle, friend and neighbor. He was a proud man and very loyal; his word was his bond. Ralph loved to work with his hands, and one could often find him in the garage tinkering with a lawn mower or working on some other project. When the weather was nice you could count on a friendly wave hello from the porch as you drove by. Ralph was very proud of his family and he enjoyed spending time with them and especially loved watching his grandchildren play and grow. His love, pride and dedication to his family was unmeasurable. He was honest, hardworking, loyal and always willing to lend a helping hand whenever the need arose. He will be missed greatly.

To honor the family’s wishes there will be no public calling hours or services as the family will be saying their goodbye privately. Ralph and his family’s care have been placed in trust of Mohawk Valley Funerals and Cremations 7507 State Route 5 (corner of Bidleman Road), Little Falls, 315-508-5131.
To order memorial trees or send flowers to the family in memory of Ralph Harold Farrington Jr., please visit our flower store.