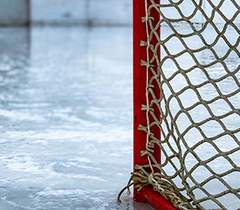 Raymond Charles "Charlie" Luker, of New Hartford, passed away unexpectedly last month at the age of 65. He was a good-hearted but difficult soul. Those who knew him saw the best in him. We will miss him.

He was born on the 4th of July, 1956. He leaves behind his patient wife Kim and his loyal and loving daughter Katie and her husband Keith, along with their children Luke, Jack, and Julia. He was predeceased by his parents, Ray and Aina Luker, and is survived by his brothers Dan and his wife Karen, Larry and his wife Mary, and also by his sister Joanne Sullivan and her husband Bob. Joanne was Charlie’s lifeline, and she did yeoman’s work.

Charlie was an accomplished construction manager who oversaw many commercial building projects in Albany and in and around Utica. He was respected in the field, worked hard (in the Ray Luker tradition), and always got the job done. Charlie embraced and played hockey with a passion and made those who played with him better players. He was a hard-nosed winger who skated better than either of his brothers and drove goaltenders nuts with his patented slap shot to the lower right corner. And he loved his Bruins. We all wish he would have kept playing.

Charlie never really let his guard down, except when it came to dogs. He was a kindred spirit, and liked how dogs came right back at him, straight from the heart, with no judgment. In his later years, when he’d call, he’d ask about family dogs first, and then family. We're hoping his spirit is now running with his beloved golden retriever, Jake.

Many, many heartfelt thanks to John Pitarresi, who kept track of Charlie and believed in him when he was lost and was always there for him, more than we knew, and to Chris and Carleen Madden, Alice and Randy Bogar, and the Saint Elizabeth’s ER team. Thanks also to all our other friends who stepped up and stood by Charlie at various times over the years. He appreciated your effort and your confidence in the man he was. He cared for each of you more than he could ever say. We ask that those who knew him remember the Charlie we all believed in. Smart, fearless, and outgoing. Back in the day, before the demons he couldn’t shake, he could light up a room. We're all saddened that he lost that joy of life and pray that his next life will be better. We are immensely grateful to all who have recently reached out to us, from almost everywhere, to let us know how much you cared for Charlie and your memories of him. He left a mark.

A memorial Mass of remembrance for Charlie will be held at Our Lady of the Rosary in New Hartford on Saturday October 16th, at 10:30 a.m. Charlie and his family's care has been placed in the trust of Mohawk Valley Funerals and Cremations, 7507 State Route 5, between Little Falls and St. Johnsville, 315-508-5131. To offer online condolences, please visit www.mohawkvalleyfunerals.com.
To order memorial trees or send flowers to the family in memory of Raymond Charles Luker, please visit our flower store.