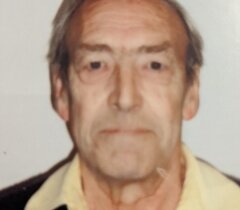 Mr. Raymond John Davis, 78, a resident of the Betsy Ross Nursing Home, Rome, passed away peacefully on Sunday, August 16, 2020, at that facility.

Ray was born July 13th 1942, in Obersley, England. The son of the late John Thomas and Annie May Davis. In August 1982 he married Rita May Barnes in Telford, England. That bond endured 33 years until Rita’s unexpected passing October 2015.

Mr. Davis worked at National Standard in England and Bartell Machinery Rome, NY for more than 30 years. He was a successful engineer working in product development and technical services. Ray was instrumental in the design of the tire machinery products and traveled extensively to customers in Asia and Europe. He was admired by his work colleagues for his dedication and his humor. In his retirement, he enjoyed golf, watching NASCAR on TV, spending time with his wife and family, and traveling leisurely.

Ray is survived by his brother and sister in law, Robert and Sue Davis Drotwich, England and by his two daughters and sons in law, Natasha and Sean Carter; Droitwich England and Sara and Jon Iannone; Rome NY. Also surviving are his grandchildren, Hannah Carter, Leia Carter, Joshua Come, Kristina Iannone and Jon Iannone Jr.

At the families request there will be no calling hours or formal gathering, In lieu of flowers, please consider a donation to the Alzheimer’s Association. Raymond and his family's care has been entrusted to Mohawk Valley Funerals and Cremations, 7507 State Route 5 (corner of Bidleman Road), Little Falls, 315-508-5131. To offer a note of condolence to the family, click above.
To order memorial trees or send flowers to the family in memory of Raymond John Davis, please visit our flower store.