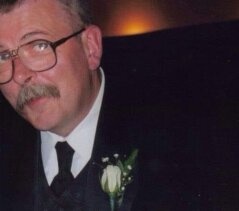 Mr. Charles J. "Chuck" Crimmins, age 69, of Church Street, entered into eternal rest peacefully on Thursday evening, May 6, 2021 at St. Johnsville Nursing and Rehabilitation, following an extended illness. He had the love, support and assurance of his family at his bedside, when his passing occurred.

He was born on September 25th, 1951 at Little Falls Hospital and was the sixth child of Augustus Bernard and Hilda (Smith) Crimmins. Chuck was a lifelong Little Falls resident and graduated from Little Falls High School, “Class of 1969.” Chuck furthered his education attending Herkimer County Community College and also Mohawk Valley Community College. Chuck was united in marriage to Susan Michelle Senft on November 30th, 1974; a loving, devoted and memorable union of 46 years.

He was a graduate of First Line Supervisors Training Academy of the New York City Fire Department and graduated from the NYS Police Academy held at MVCC, as well as NYS Basic Corrections Officer School and multiple other associated schools. A first responder and firefighter at heart, he answered the call of duty joining the Little Falls Fire Department as a call firefighter in 1972. Two years later he accepted a full-time position as a city of Little Falls firefighter. In 1990, Chuck was promoted to second assistant fire chief and proudly held this position until he retired in 2000. While at the fire department, he served as a training officer and was the liaison to Little Falls Elementary Schools. He also served on the Herkimer County Arson Task Force where he was an investigator for 20 years. A proud member of Local 2966 International Association of Firefighters, he served as past president, vice president and secretary. Chuck was a member of the International Association of Fire Chiefs, New York Association of Fire Chief’s and the International Association of Fire Chiefs.

Mr. Crimmins always was an active and proud member of the community and belonged to the German Mannerchor and the Moose Lodge. After retiring from the fire department, Chuck assumed the position of campus safety officer at Herkimer County Community College. During his tenure at HCCC, New York State enacted the campus peace officer legislation. Chuck was one of the first sworn peace officers in New York State. He retired from the college in 2011, due to health issues and was so happy to spend more time with his cherished family, whom he loved so much.

While his professional and civic duties were notable, Chuck was most importantly the Crimmins family patriarch and protector and loved his family with no conditions. As a dad, he was a supportive, caring, and hands-on father. He always wanted to please his children and his great smile was his sign of approval. He was gifted in creative humor, wit, and “Chuck-isms”. He was a gentleman, a man’s man, and he had a compassionate heart which led him to be a mentor and family figure to many. His family bond was unshakeable, and his hand in yours made you feel safe and warm. He had a genuine desire to help others (especially his brother firefighters and police officers), be a shoulder to cry on, and get people to a better place. His children were his greatest gift and his pride and joy. He showed patience and was very forgiving. He encouraged his kids to be the best they could be, learn from experience, and journey well in this life. He hoped they would remember his teaching, his bits of wisdom, and most of all his love.

Survivors include Chuck’s devoted wife of 46 years, Susan; his cherished girls, Erica and her children, Jake, Natalie and Colton of Little Falls, Sarah Harrer and her husband Joe and their children, Dylan, Chase and Lyla of Little Falls, and Laura and her children, Noah, Logan and Mia; adored great grandchildren, Luke, Raelynn and Liliana; a sister, Judith Metz of Ilion; numerous nieces, nephews and cousins along with many dear friends. Besides his parents, he was preceded in death by his sisters, Mary E. Sadlon and Eleanor D. Mandara, by his brothers, Gordon B. Crimmins and James L. Crimmins and by brothers in law, Bill Metz, William Sadlon and Frank Mandara. He was also predeceased by his in laws, Reinhold and Elizabeth Senft.

The Crimmins family's care has been placed in the trust of Mohawk Valley Funerals and Cremations, 7507 State Route 5 (corner of Bidleman Road), Little Falls, 315-508-5131. Traditional services with formal firefighter honors will take place at 9 am on Monday, May 10, 2021 from MVFC with the Rev. Joseph Famulare, officiating. Procession (led by the Little Falls Police and Fire Departments) will follow to St. Mary’s Cemetery, town of Herkimer, where he will be laid to rest. Relatives and friends may pay their respects at the funeral home on Sunday, May 9, 2021 from 1-4 pm. Members of the Little Falls Fire Department will gather in a body to pay their respects at the funeral home on Sunday at 2:30 pm.

In Chuck’s memory, kindly consider donations to St. Jude’s Children’s Hospital which was very special to him. The Crimmins family is so extremely grateful to the city of Little Falls first responders, police officer’s and EMTs/firefighters for the care and friendship offered to their father throughout the years. A heartfelt thanks is also extended to the devoted and caring staff of St. Johnsville Nursing and Rehabilitation for their kindness and compassion. The family considers the care given by Dr. Norman Freund and Dr. Amy Grace a true blessing; Chuck considered them as his own family.
To order memorial trees or send flowers to the family in memory of Retired Asst. Fire Chief , LFFD-Charles J. "Chuck" Crimmins, III, please visit our flower store.