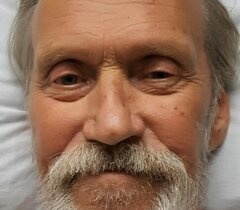 Richard P. Angevine, 67, of Ilion, passed away Monday evening, October 26, 2020, at his home, with his devoted caregiver and companion by his side, following his ironman battle with a longtime illness.

He was born on August 22, 1953, in Brooklyn, the son of Dolores Miller Angevine and the late Joseph Angevine, Jr and was educated in city schools.

Richard’s greatest passion was the love he had for his Harley and riding. He enjoyed his day trips with his companion, Lorraine. Richard was a former member of the Ilion SnoDrifters.

He is survived by his mother, Dolores; his longtime companion, Lorraine Cagwin; his siblings and their spouses, Joseph and Ellen Angevine and David and Donna Angevine, all of Greenport and Patricia and David Rackett of Florida; several nieces, nephews and cousins. Richard is predeceased by the love of his life, his canine companion, Coco

In keeping Richard’s wishes, there are no public viewing or visitation. Donations, in his memory, may be offered to Hospice and Palliative Care by visiting www.hospicecareinc.org .

Richard and his family’s care have been placed in the trust of Mohawk Valley Funerals and Cremations, (315)508-5131, 7507 State Route 5 at Bidleman Road, between Little Falls and St. Johnsville.
To order memorial trees or send flowers to the family in memory of Richard Paul Angevine, please visit our flower store.