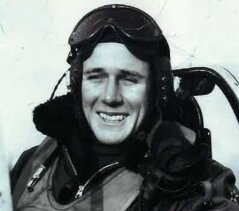 Richard was born in Oil City, PA on April 18, 1924, son of the late Floyd and Emma Darling and educated in PA schools. He graduated from Colestock High School, Titusville, PA with the “Class of 1942”. Richard furthered his education receiving a bachelor’s degree from North Carolina State College in 1949. Richard was united in marriage with Cathleen Rose Siembida who preceded him in death on May 14, 2010. He answered the call of duty and enlisted into active military service with the U.S. Army Air Corps during WWII. He was an accomplished fighter pilot stationed in Wormingford, England and obtained the rank of Major. He was awarded the Air Medal with Three Oak Leaf Clusters, The French Fleur’d’gere Medal and The Distinguished Flying Cross. He was honorably discharged holding the rank of 1st Lieutenant .

Mr. Darling was employed for ten years by Hewitt-Robbins, Inc. of New York City, as a field engineer. He went on to own and operate his own engineering consulting company until his retirement in 1980. Mr. and Mrs. Darling retired and settled in Herkimer in 2004. He was a communicant of Annunciation Church, Ilion.

Survivors include his daughter, Joyce Patterson and husband Charlie of Herkimer (with whom he resided for some time); cherished grandchildren, Jeremy Patterson and Janie Warrin and husband Austin; one adored great grandson, Eli Warrin.

In keeping with his wishes, there are no calling hours. A private graveside service will take place at Oak Hill Cemetery. Herkimer, in the spring where burial will take place alongside his wife, Cathleen. Military honors will be offered.

Richard and his family family's care has been entrusted to Mohawk Valley Funerals and Cremations, 7507 State Route 5 (corner of Bidleman Road), Little Falls, 315-508-5131. To offer a note of condolence to the family, please click above. Final burial in the spring will be private in Oak Hill Cemetery, Herkimer, where he will be reunited with his beloved late wife. Kindly consider memorial offerings in his name to Sitrin's Veteran Military Rehab, PO Box 1000, New Hartford, NY 13413. Envelopes may also be obtained from Mohawk Valley Funerals and Cremations. The family offers their gratitude to Father Paul Catena for his spiritual guidance during this time.
To order memorial trees or send flowers to the family in memory of Richard Elsworth Darling, please visit our flower store.